It was hard to believe Aria had gone through this before…but here she was, one year from when she’d decided WordPress City was going to be her home for real. One year from the day she’d discovered what had appeared to be an ordinary leather-bound book, but it was actually a spellbook, which had served as a field guide to the anime and manga that she had encountered since then.

In that time, she had amassed over 200 separate entries dedicated to these works. The most liked entry was Should One Quantify Whether They Are An Anime Fan? with 25 likes and the most talked-about entry being the October Must-read Monthly Monday with 18 (now 19) comments, while the most popular month was August 2018. Furthermore, the most popular day of the week was Monday while the most popular day for the blog was February 19th, 2018. It was surprising this day wasn’t a Wednesday…but it was unsurprising that this day involved a Must-read Monthly Monday. Those were often some of the best-performing posts, even if only for people saying “Thank you for including my post”.

However, when it came to the most read post, the story was very different. Specifically, these were Aria’s thoughts on the top 5 (ignoring some obvious pages, such as the home and About pages):

‘This post was put out at the height of the anime’s popularity as a seasonal show and also one of the earliest of the 12 Days of Anime, so the only real surprise here seems to be the fact it garnered double the views of the next post…maybe it was the link to the manga that brought people in? None of the other posts including a link to the official translation have performed as well as this one, so maybe someone has used it as a bookmark to access the blog…’

‘This post was linked to the Aniblogger Coalition and specifically Shoka’s post on it (for some reason I incorrectly associate it with the Innominate Anime Podcast), so that would explain the performance – not only Shoka’s readership, but the other members’ readerships would try to point to it. However, it’s the attention to detail and the “agenda” that make this post stick out – it makes the post look more authoritative than it really is. Not to mention the fact the “agenda” was something that was spur of the moment (to help me remember what I was writing about, due to the fact the source was a podcast), which is why you don’t see it in other posts…’

Should One Have to Quantify Whether They Are An Anime Fan?

‘This one attracts a lot of arguments and people get lost in their arguments on the way to explaining themselves properly (me included), which probably explains its popularity. I did do a bit of a shameless advertising about this post in the comment section of Thoughts in Motion, it links back to Lina’s post and Karandi linked to it in one of her In Case You Missed Its, which adds to the whole “readership comes from somewhere else” idea.’

Why Should You Read Boku no Hero Academia: Vigilantes?

‘The first manga post and the only one in the 12 Days of Anime, it was one I was genuinely excited about and you can feel that through the writing. Not to mention, two volumes of it are actually in my closest manga store now so I feel proud for jumping on that bandwagon before it became a hit. Now to wait for the inevitable anime adaption…‘

‘This one came as a bit of a surprise come November 21st, but a look through the comments told me I submitted this for Jon’s Creator Showcase in July. Hinamatsuri is a good show though, and Hitomi is just one part in making it work, so please check the anime out if you haven’t already…

…wait, why do I sound like I’m the mangaka here…?’

Moreover, Aria was no longer alone on her quest. There was also a small crowd of 139 followers willing to hear of her exploits. (With a number like that, you probably couldn’t call it “small” anymore…) Most came from English-speaking territories, but some came from Asian or European regions as well. 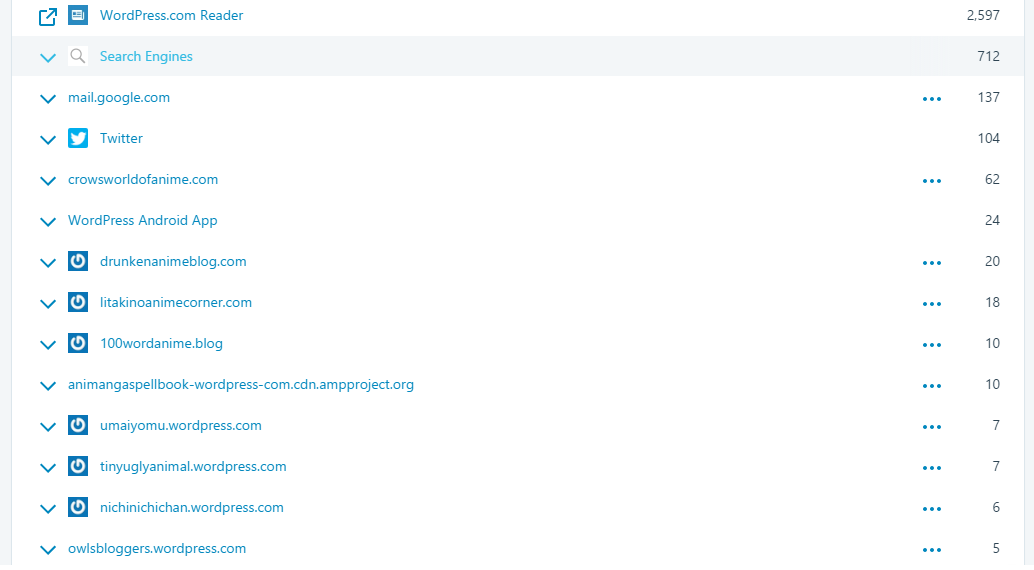 In regards to where they came from on the internet, most were from obvious sources like the WordPress Reader. The only real surprise in the top 5 was Crow’s World of Anime, because for some reason, that place never pinged back properly.

A lot really had happened in the last year though. All sorts of trials were passed, a few were failed and some were rethought. Most importantly, the conscious choice to switch from “MagicConan14” to “Aria” was a big turning point. So was the point where multiple passions converged to create a reignition of her writing style.

Otherwise…well, there was nothing else to do but look forward to the next year in the Spellbook’s history of anime and manga blogg-er, documenting.

With that, we have come to the end of the celebration week – hopefully by the time we’re back next year, it’ll be even bigger! (Hopefully we’re still here next year…)

6 thoughts on “1st Blogiversary Day 7 – One Year of the Spellbook!”