Colour coding of the text:

Woot! We finally got somewhere after all this training business!

More training. Except, in Kimetsu no Yaiba, they make it interesting instead of a bore. We see actual progress being made. Actual change in the character throughout, differences in his strength, his understanding, his conviction. It’s no longer just a timeskip, which is kinda a different take.

Well, training is training. I’m not too hyped about it, but there’s nothing to detest.

Well… A training arc compacted into a single episode, basically. It felt a little rushed, but at least we’ll be getting into the main story sooner, right? I still want to know what’s up with Nezuko, though…

Welp, it happened. I finally got into new territory (as in, I didn’t know what happened from the start of this episode onwards). So…I don’t know why, but the episode seemed more comedic than usual. Also, I swore Tanjiro was going to break the rock with his head. I mean, we’ve been shown how tough of a skull he has…

Really good. The way Makomo and Sabito were presented brings back memories, and the training arcs too, even if my memories of that are quite blurry at this point, due to how far ahead I am. They did make the training arc more interesting than it should be though, typical of ufotable.

The gist of the arc fit my expectations pretty well, but I was a little surprised that that was how the rock broke. Witchcraft…

We got a solid chunk of that gorgeous, incredible battle animation by ufotable. Very very good. Other than that, yeah, it was pretty much within my expectations.

Welp, sorry to state the obvious…but Final Selection. Plus Tanjiro will definitely win and be reunited with Nezuko, because that’s what the ED is saying. (But I don’t expect there to be spider lilies, nosirree.)

More good stuff, and we are going on the Final Selection test! Whoo! Can you imagine it, our boy Tanjirou has already come this far?

Whatever “Final Selection” means, we’re probably going to see new characters who are on a similar level as Tanjiro. So far we only have senpais and mentors.

It’s been, what was it again? A 2-year time jump now? BRING BACK NEZUKO!!

The scene where Tanjiro cuts Sabito’s mask and Sabito smiles, then disappears to reveal Tanjiro has cut the boulder. I let go of a breath I didn’t realise I was holding.

Has to be the appearance of Makomo and Sabito. When they first appeared before Tanjirou, the surrealness was done very well. And of course, there are other reasons for me having the most reaction, which I won’t say since it’s spoilers.

This is a tough one… I don’t know that mine’s much different from what anyone’s already said so far. So, pass.

I don’t think I particularly wrap my head around Makomo and Urokodaki is just a sadist, so I’ll say Sabito. It is always good to have a guy with an aura of mystery around.

Makomo! Such a good girl. But of course, there are so many good girls in this show. She’s the star of this episode though. But still, Nezuko almost stole that spotlight away from her with the next episode preview cute noises. Can we have a Nezuko plushie already?

Yeah, Makomo was super cute, and an interesting character from what we saw of her. I just wish we could get to see more of her and Sabito, because they were seriously pretty awesome. What’s with everyone wearing masks, though…?

Makomo vs Tanjirou, pt. 2. Whew, the camera direction and pacing was done so well. The reveal of Tanjirou’s now long hair was great too, plus his look really changed from before. Much more firm, resolute. And of course, there’s the fact that I was holding my breath even though I knew what was going to happen.

I love the way the show uses camera angles to make everything so much more intense (of course, a ufotable staple.) It really adds an element of three-dimensionality that makes every scene pop.

That one explanation of the Demon Slayer Corps. It was very much stating what we’d already been shown with Weird Head Demon and Nezuko.

Not enough Nezuko this episode :<

Sabito’s repetitive “If you’re a man!” rant triggers my inner SJW. Excuse you, what about Makomo? And my complaint for Episode 1 about excessive narration is still valid. If an event is depicted on screen, what’s the point of describing it again?

One of my least favorite tropes is timeskips… I mean, this episode blasted through, what, 2 years or so? With no explanation as to what’s going on with Nezuko. Not to mention after the first year, he’s basically learned nothing at all…

Honestly, with how lazy I am, if I were to have to train like Tanjirou did AND then have been told to cut a giant ass boulder with what skills I have, I would just quit right there. It would kill most of my motivation.

Sabito is a jerk. Because I’d be more triggered than Tanjirou, I would train twice as hard as him to make Sabito pay for taunting me!

I have to agree. Sabito did a fantastic job taunting Tanjirou, and I think that had a great part to play in his eventual success. After all, what better motivator is there than proving someone wrong? 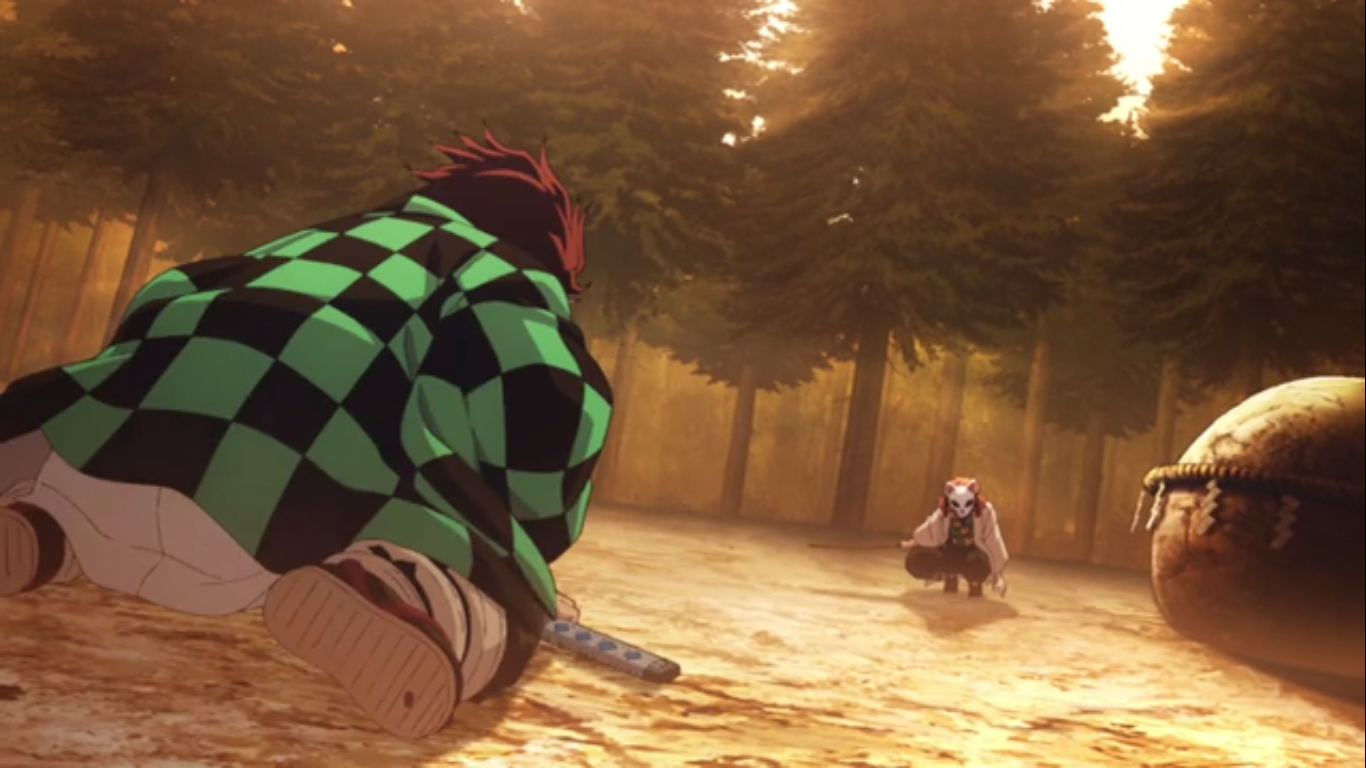 Just look at it – the way the sun shines on everything, the way Sabito is crouched, the angle…it’s gorgeous in only a way Ufotable and studios of its ilk can pull off. 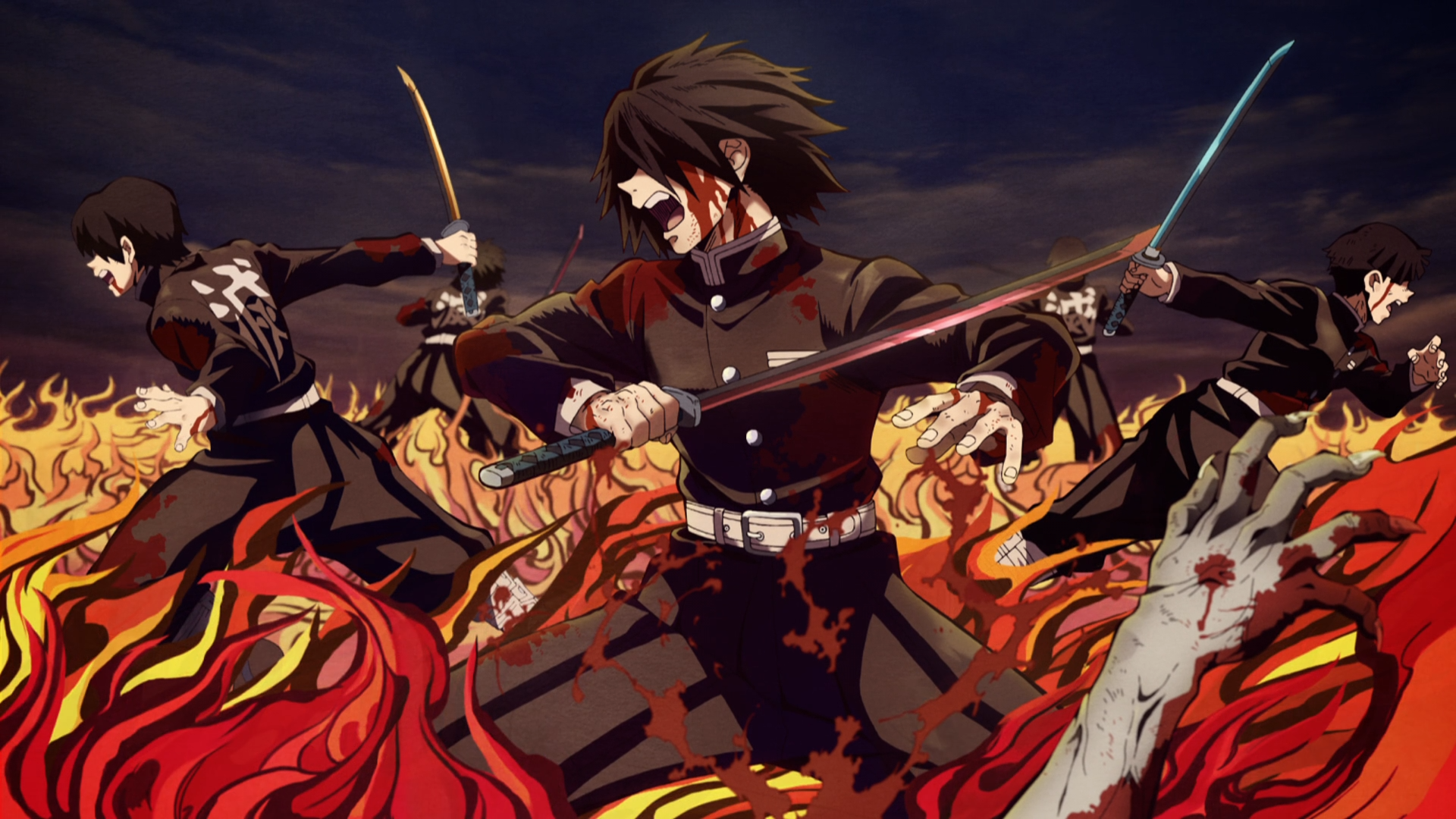 The aesthetics in both this scene as well as the one where they showed off a person’s body when they use the breathing technique was awe-inspiring. I love it. 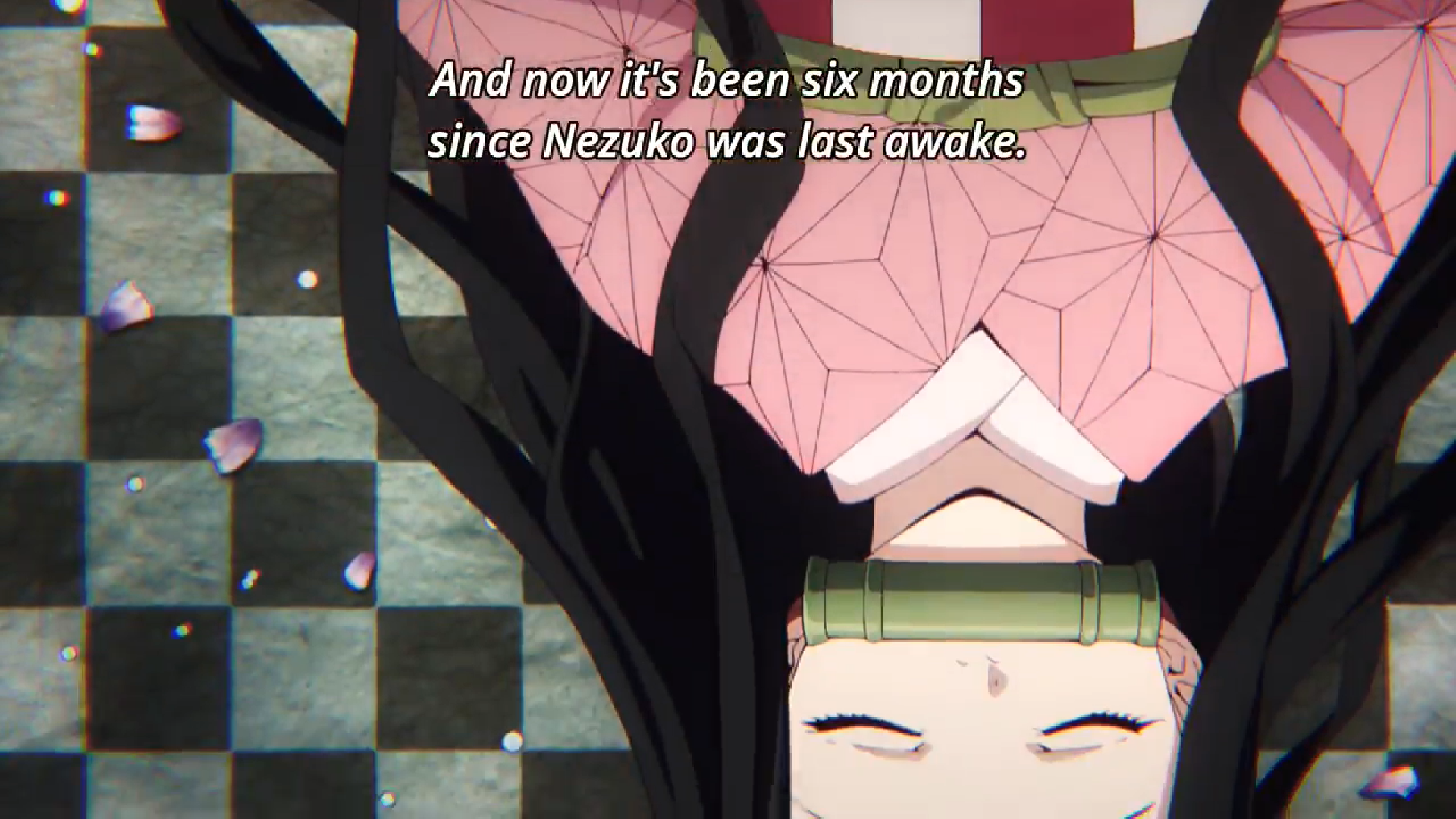 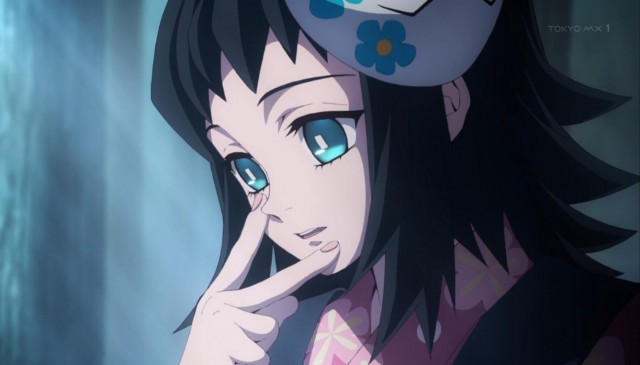 I loved this scene a lot. The framing is just so cool, with the focus on her strange eyes, illuminated by the moonlight streaming through the trees. Fantastic.

It’s nothing but training montages, but it does end well.

Doesn’t impress me yet, but maybe in the next episode.

Everyone but Astral’s had a turn so far, so I expect him to post the next episode’s worth of words and pictures.

So, how are you liking the collab so far? Is it too many memes and too much snark?