Turns out I didn’t need to worry – Funimation and my regional service are together again and providing less buffering than Crunchyroll.

This post contains Sacred Beasts, Astra, Maou-sama Retry! and UchiMusume. Next up is Fire Force, Dr Stone, Granbelm and Ensemble Stars. I’ll be skipping the recap of DanMachi (I saw s1 at the start of the Spellbook’s existence!), so then it’s Kochoki, Arifureta, Cop Craft, DanMachi and Given.

(Sorry if I’m a little too snarky here. I’m currently on meds after I had some dental work done, so bear with me as I suffer from a bunch of sickness symptoms I didn’t expect to have – I’ll spare you the horrific details – and increased snark to go with that territory. Thankfully, it should be over after a few days.)

To the Abandoned Sacred Beasts

Can someone please get a proper abbreviation for this show? I’m leaning towards either “Sacred Beasts” or “Katsute”, but since the latter means “former” (confusing as that sounds)…that’s probably not a good option.

That aside, it had an exposition dump opening – the type I’ve basically come to dread since Fairy Gone. The rest of it seemed average, aside from the action animation which was above average for the purposes required – nothing too sakuga-looking, but there weren’t many silly in-betweens that I managed to catch either.

I did like making fun of it as I went (“Ooh! It’s the Abominable Walrus! I’m so scared~! (mocking)”), but that was because the increased buffering I’ve been experiencing with Crunchyroll as of late (which seems to be temporarily fixed by going to another tab, so I multitasked using manga) means I have more time to make snappy comebacks about everything. In that sense, it’s hard to tell if mocking a series is a genuine metric for dropping anymore…

Before I start, I want you to play this to set up the mood (ideally from the start to 0:43 – ). You might also want to read some of my previous comments on the series, based on the manga.

That said, this is a pretty faithful adaption of the manga, with the exception of the framing (sometimes there was letterboxing around shots and I found that somewhat distracting), CGI (which was pretty good) and boob shots (which weren’t in the manga, IIRC). The only thing I don’t quite approve of is the amount of recapping it did, even though it was brought up at relevant parts of the episode…it seemed like it was padding for time.

Alright, it’s time for this meme, which I made earlier (on the day this post went out) to reflect the current state of the anime world: 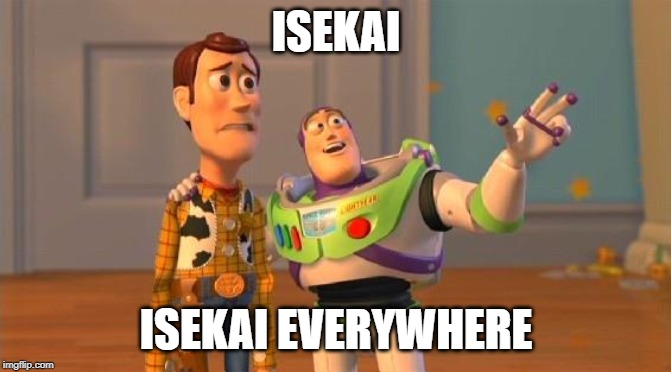 I feel like I’ve basically seen everything this show is already. Even blonde!Rem – her name is Aku, but she still looks like Rem – I’ve seen before. I guess the biggest insult to this show is the fact it doesn’t really know how to transition between scenes, plus a really derpy run cycle for when it does decide to do something marginally creative with those transitions.

If It’s For My Daughter, I’d Even Defeat a Demon Lord (UchiMusume)

After trying to call this Uchinoko and thinking it looked too much like “tsuchinoko”, I checked the kanji again (it uses the kanji for daughter to stand in for the kanji for child and so…welp, I have an acceptable alternative name, although I don’t know if it’s a widely used one.

Anyway, I was afraid this would be like Usagi Drop which is why I didn’t want it at first, but with Astral in hospital, I figured I’d at least do a first impressions so I could tell him about it.

It’s a generally pleasant show and not showing any signs of skeeviness, but I can tell Latina is meant to be what you’re watching for and I don’t think she’s that adorable, to be honest (even without medication-related suffering). I am interested to see whether the language barrier is removed over time or whether Dale learns the demon language as a way to face the demon lord, though, so for that I’ll keep watching.

So how’s your experience with these shows? Did I skip anything good? (Aside from Vinland Saga, I can’t access that. For a refresher, see the anticipated anime list here.)

9 thoughts on “Summer 2019 First Impressions: One Demon Lord Too Many”