No rest for the weary, eh?

Gotta watch my KyoAni show for OWLS, Yuki Yuna for a watching challenge I signed up for (on a whim), finish almost overdue library books, do my usual real life stuff and my weekly post reservoir has dried up…and so’s my motivation, because it’s directed towards all that stuff instead.

Enough about how busy I am though. Here’s the colour key:

When I saw Karandi had “The Battle of the Screamers Begins” as her subtitle…I did a little mental fist pump. I think that tells you a lot about this episode. (Also the humour was mostly on the terrible side…)

I actually don’t agree with Aria here. I thought this episode was hilarious, although maybe that’s because I’m a guy and identify more with the shouty idiots. Inosuke is hilarious and I’m excited to see more of him.

The three screamy shounen were obnoxious (especially towards the end, though it was really just crazy Zenitsu and Tanjiro on the defense), but I thought their team dynamics worked out surprisingly nicely.

Comedy gold alongside good character developments, in a downtime for the plot.

I thought the mansion was going to be yet another demonic one! Guess I totally missed the “wisteria” hint. I was surprised by how little happened, but didn’t really mind either (half-serious teenage boys screeching is better than their battle cries).

Yes, I almost forgot how good the in-betweens were for Kimetsu no Yaiba and how funny they were.

We see these guys work together (?) for once. More demon butts kicked. Lather, rinse, repeat. The end.

I wanna see our bois really fight some demons!

They will collaborate in fun and more unexpected ways in future battles, and Zenitsu lusting after Nezuko would be a bad ongoing gag. It might be interesting to see the team disintegrate in the future due to their differences, but I’m sure they’ll stick together for most of the series. Is butterfly girl going to join the team??

I loved the little mildly psychotic chuckles out of Inosuke. Matsuoka’s doing a fantastic job bringing that character to life!

Zenitsu asking about the box in the quiet of the night, and Inosuke keeping silent during it. A scene where implied trust is subtly unsettled…well, until Nezuko actually comes out and Zenitsu gets disdainfully crazy.

Almost the entire episode was on point. I laughed at all the jokes.

4. Which character did you like the most this episode? Have they done anything in particular/changed?

Tanjiro again. You wouldn’t know this since I try not to mention it, but I have sisters. I’m the 2nd of my family, so I don’t get filial piety (that belief Tanjiro has about the eldest son doing everything for the family) and yet recognise that “You want my food? I’ll give it to you!” thing (and so on, so forth), since my older sister does that too…

Inosuke for sure. He’s just so crazy and has way too much energy and competitive spirit for his own good… or the good of literally anyone around him, basically.

Giyuu… I never liked him in the first episode, but he makes a good homeroom teacher.

5. What’s the high point of the episode for you and why? [Mandatory]

The fact we didn’t have to see what happened during the times the animated faces/transitions came up. I can only assume a lot of screaming happened in between…

I’m just enjoying the weird friendship between Tanjiro and Inosuke…

Taisho High School. Bread Nezuko is precious (I suspect they invented the bakery set-up just to fit that scene in).

All the comedic moments. I laughed a ton, enjoyed it a lot and it was just generally done well.

I miss Taisho Secrets already…also, I think Urokodaki makes a better sensei in the alternate universe, simply because that’s the role he plays in the actual story as well.

I dunno. I thought it was a pretty solid episode, all things considered.

Nezuko is cute, yes, but the whole cute girl = possession to fight over joke is so last-generation shounen.

For me, not really anything to be improved upon.

Not a lot actually happened this episode… so that’s a tough question.

If I were Nezuko, I would kick Zenitsu while he fights Tanjiro over her.

I can’t resist a good meme opportunity, so I changed my screenshot a bit:

If I see anyone making a pose like this, I go for my trusty photo-editing software. 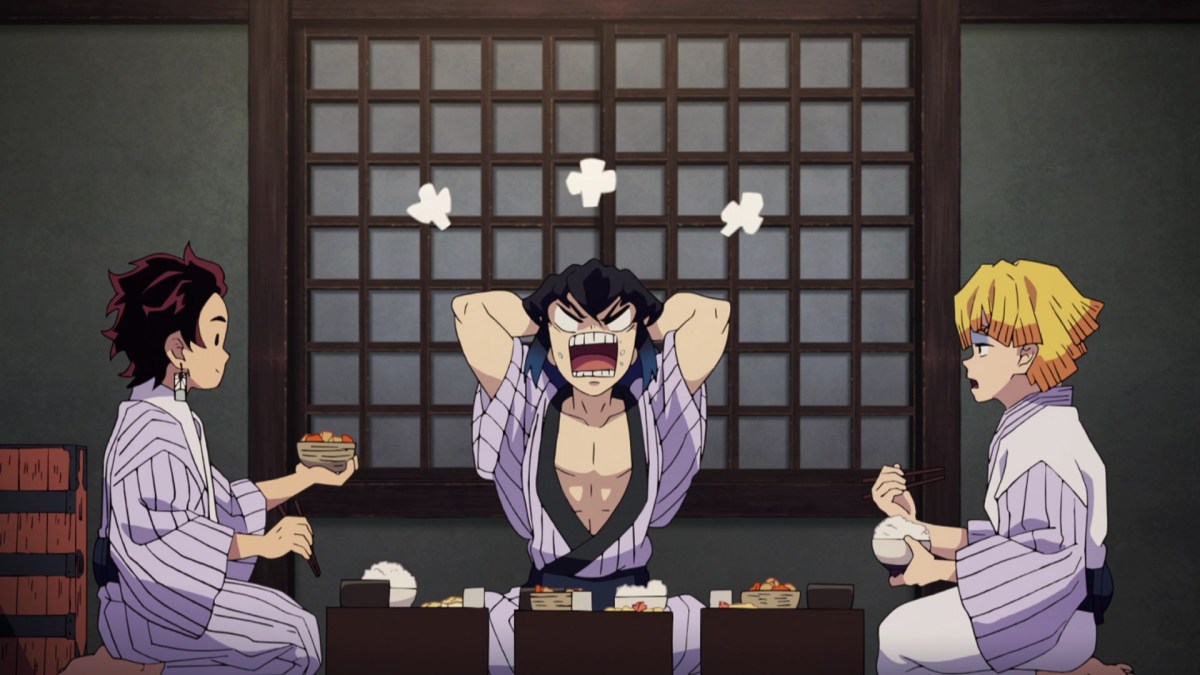 I think this screenshot really sums up all three of the characters in a pretty succinct nutshell. You’ve got the angry one, the clueless one, and the one who looks like he’s dealing with hemorrhoids. 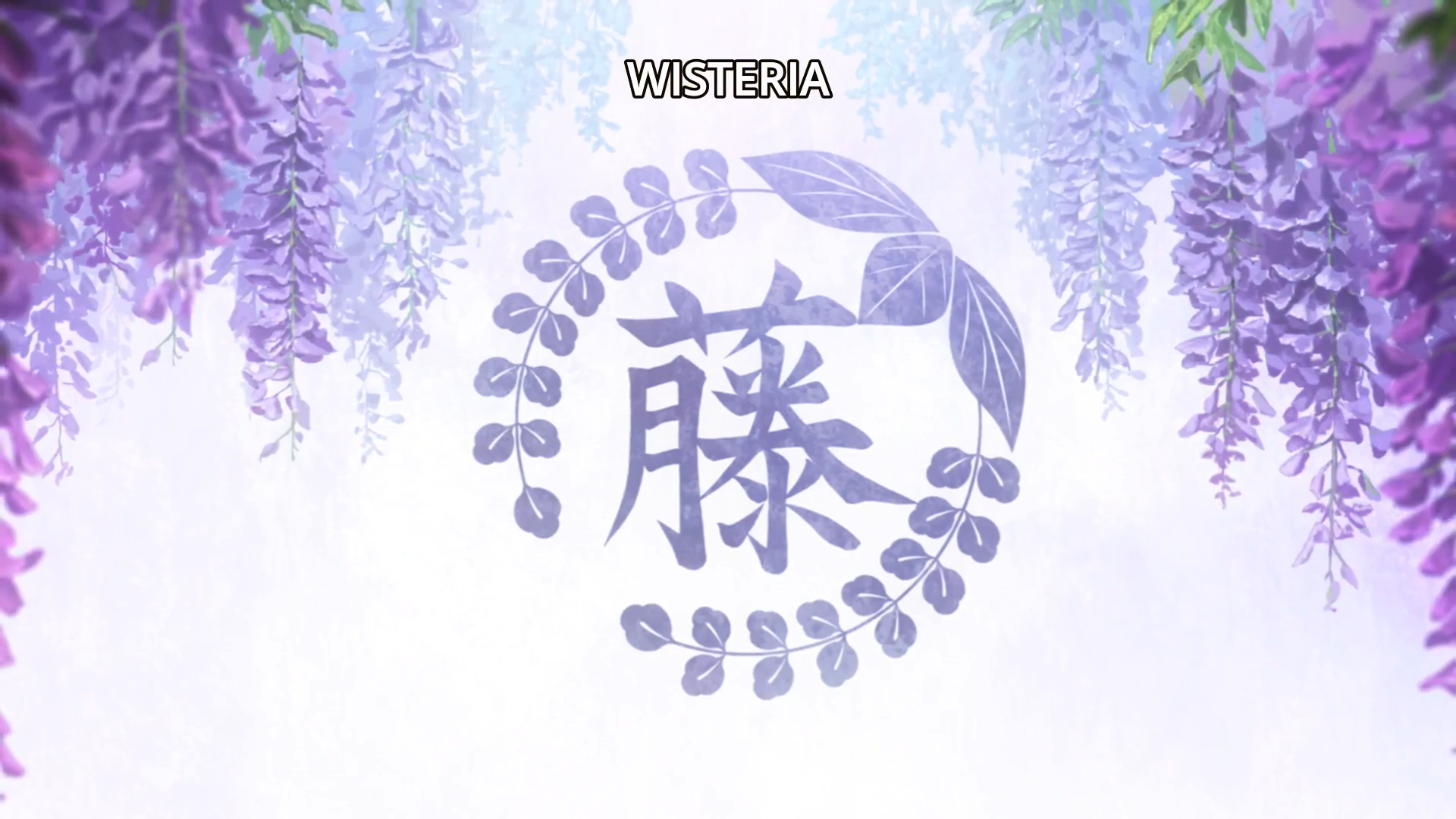 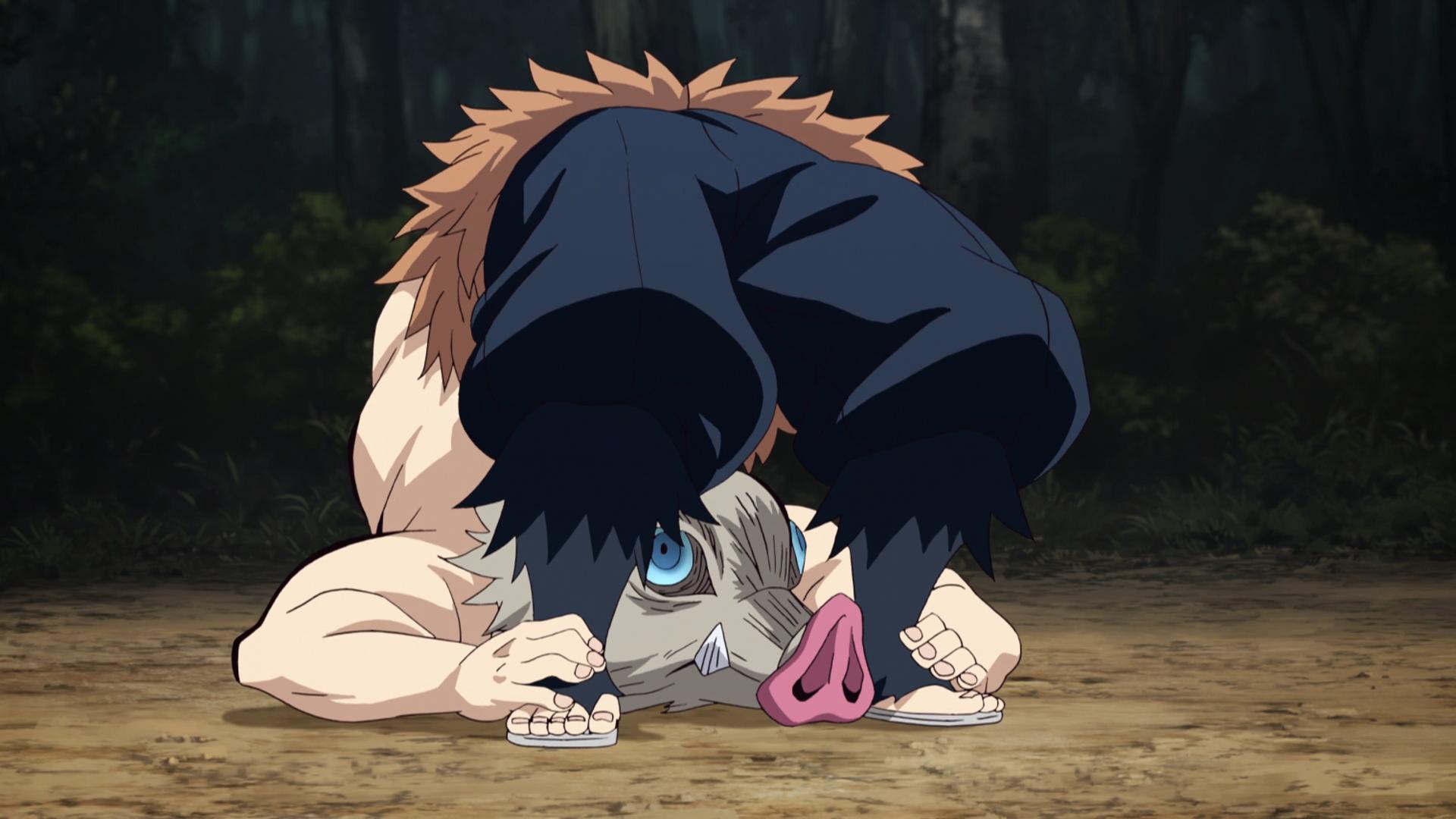 Beetlejuice laughing devilishly about his newfound job of being a gymnast, colourised, 2019.

(By the way when I was young I could almost do this, just not so much that I can put my head through my legs. Also, even now I can still put my legs on my head, yay)

It’s down time for our

Someone give Inosuke some ice cream or something, he needs to chill.

The sweet old lady and “umu” doctor are very underappreciated.

Settling down and cracking some hilarious jokes…and some ribs.

It’s time for an Aniblogger Secret! Sorry, but I couldn’t find anyone to tag-team with, so I’m doing this solo.

I don’t think anyone’s counted but me (since I’m basically the only one keeping this collab going at this point), but Ply missed 5 episodes while dropping off the map. Specifically, he skipped eps. 6 – 10.

…Well, that’s everything. There were a few revelations on our part and the anime’s, so what did you think was the most surprising thing covered in this post?