Ply dropped out on us again, so here’s another double-post from us:

[There appear to be screams of “Zenitsuuuuuu! I promise I’ll stop thinking you’re annoying, because you remind me of meeeeeeeeeee…!” in the background…]

This was a pretty good episode. As much as Zenitsu annoys the heck outta me, it’s nice to get more of his backstory, as well as his capabilities. Now if only the spider could use some faster-acting venom…

Pleasant Zenitsu episode with a reasonable opponent and some pretty battle moves.

No, actually. For once, I completely guessed wrong.

Well, I knew it was coming, so yeah. I did enjoy the execution, though.

Did not expect the spider dude to be finished off so easily. In the style of lightning! Zenitsu’s potential as the greatest damage-dealer in the team is exciting.

The demon father’s butt has to get kicked (the sister’s is optional, because that seems to be a trend in this show). It’s quite clear the father’s the member of the 12 Kizuki.

[The sounds of faint maniacal laughter echo from the background.]

Yeah, Spider Dad will have to die, though not necessarily in one episode. Am guessing that Tanjiro will be the one to deal the finishing blow this time.

When the head on legs appeared for the first time. That’s the second time in this show we’ve had a head on limbs, so it shouldn’t have caught me off guard, but I have “ARGHHHHHHHHH!” in my notes because of it.

I always appreciate combat scenes in this show, because they always just look so spectacular, and this one was no different.

Yeah, Spider Dad will have to die, though not necessarily in one episode. Am guessing that Tanjiro will be the one to deal the finishing blow this time.

Well, I think I’m starting to understand Inosuke and Zenitsu more, so technically I have 2 answers. Not that Zenitsu is my favourite now, but I’m trying to repent for all the mean things I’ve said about him. Inosuke isn’t my favourite either (#UkogiBestBoi), but I realised at the start of the episode he’s not permanently angry for angry’s sake, unlike the Demon Slayer candidate from a while back…he’s just massively competitive, which is more along the lines of a typical Shonen Jump rival than I expected.

Well, the focus is on Zenitsu, so… Chuntarou. What a brave birb, coming in to give the cowardly little tinkle a bit of courage.

The horror vibes I got from spider bro. For once, the CGI came in handy for setting the mood…

Aria’s right on the money here. I’ve been super impressed with the CGI usage in this show. Ufotable really understands how to use CGI to the fullest, and generally it’s rather cleverly disguised. I really enjoy it, honestly.

The tone of the episode was a bit inconsistent. It went from horror -> sympathy -> action hype against the clock, then a quick cooldown period, then action hype again but with Tanjiro and Inosuke.

Remove Zenitsu (just kidding.) There was a translation error in this episode. Lightning Breathing actually has 6 learnable forms, not 3. This is important. It comes up later. (Also only 3 forms would be kind of pathetic.)

Multiple long flashbacks during a fight can feel intrusive, but I’ve watched enough Naruto to not mind.

If I were Zenitsu, I got bitten and I were going to turn into a spider soon, I’d either 1) find Tanjiro/Inosuke and get them to beat spider bro or 2) get down the mountain ASAP and request an antidote…and I’d be frightened all the way. 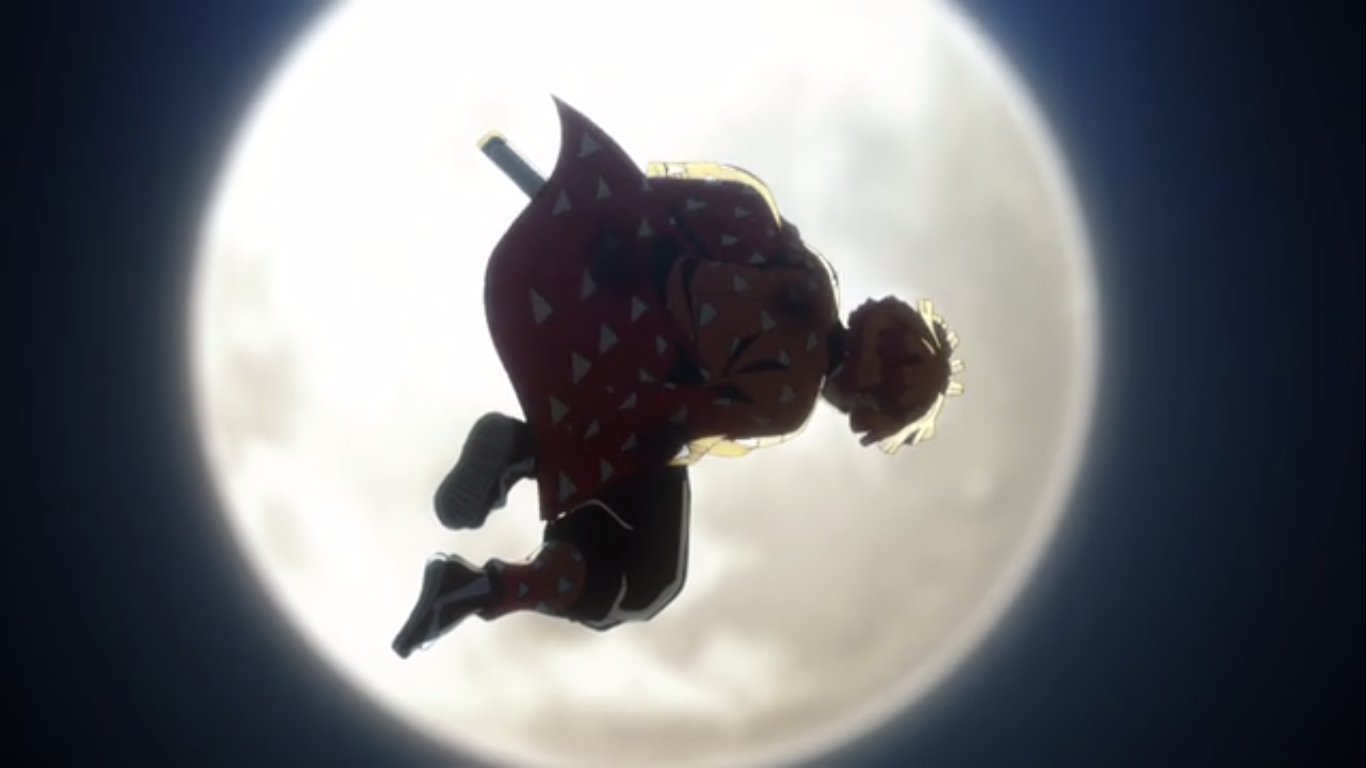 I was going to get a crying Ukogi (which triggers my moe instinct), only to get this badass (incoming) Zenitsu in the process. I really like the framing and the deliberate placing of his feet at an angle to each other. 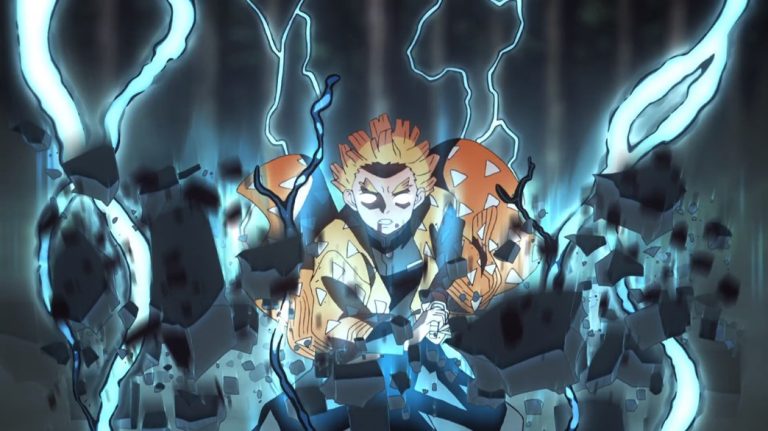 What a cool action shot, am I right? Zenitsu is super cool when in battle mode. And quiet. That’s probably the better part of it, honestly… 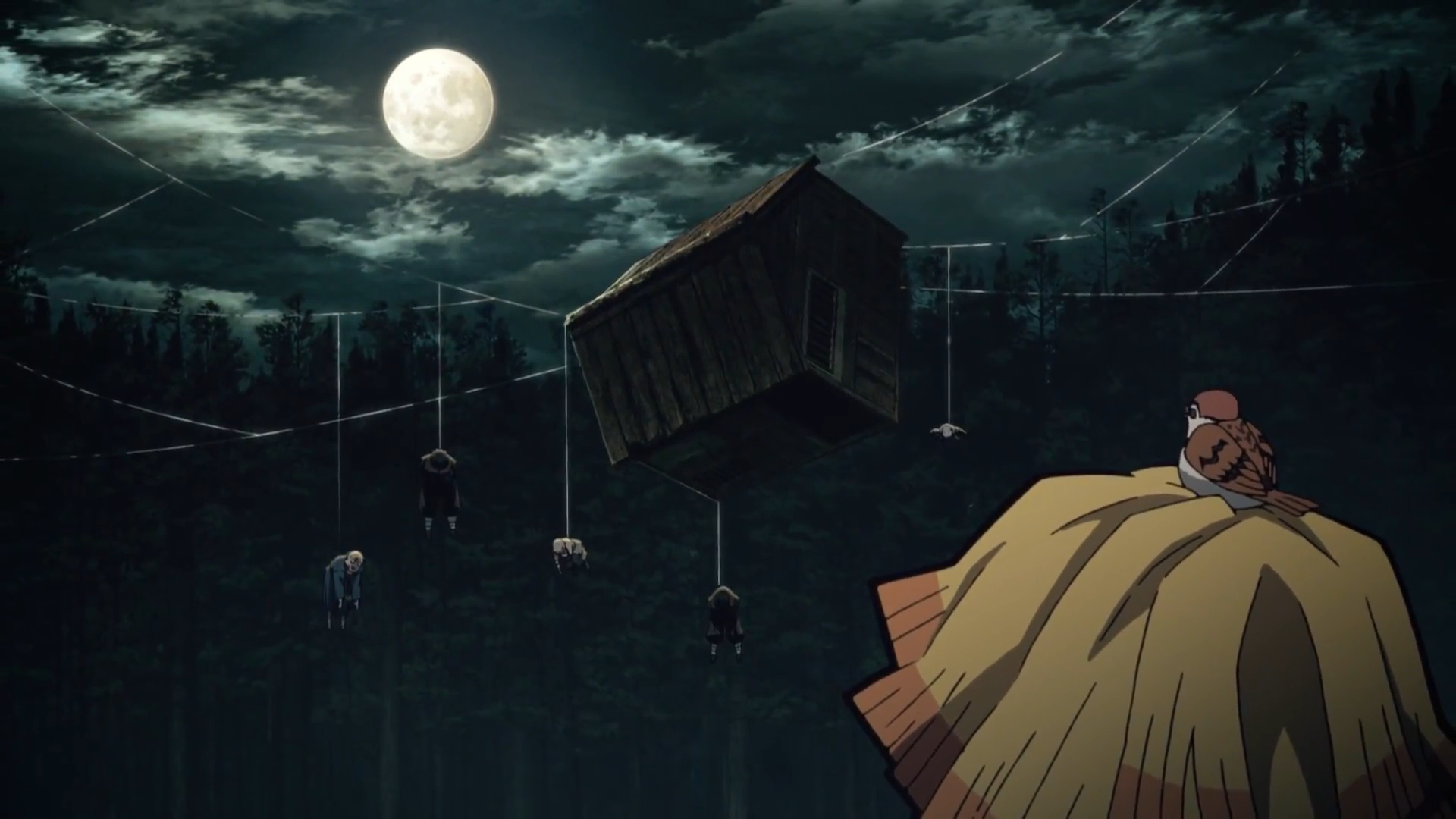 Thunderclap sounds in the trees

Scent of lightning on the breeze

This episode had comparatively milder levels of hype, but maybe that’s just me…because Astral said ep. 19 was good on the Discord before I watched ep. 18.

A very solid episode. This is one of those episodes in this show that, while containing some great levels of action, is really more focused around setting up a bigger climax, which it does BEAUTIFULLY.

Engaging episode that captures the thought processes of everyone in the face of overpowered opponents (in Zenitsu’s case, that opponent would be slow death). I enjoyed the glimpses I got of Giyu and Shinobu.

Still waiting for some proper butt-kicking on Rui and spider father’s parts…Based on the hints Astral and Ply have been dropping, I’d say spider father wasn’t the member of the 12 Kizuki, but Rui might be. I also thought Giyu would show up later than this, but maybe I’m anticipating this series to run for a Naruto– or Bleach-length amount of time.

This section is probably the hardest for me. I’m super happy with how they’re delivering these battles, and these character moments. It’s one of the rare times when I can honestly say yes, the anime is truly surpassing the manga on a constant basis.

I agree with Aria on who the real Kizuki is. Father just seems way too brainless and brawny. As for what surprised me…I suppose it was unexpected that some random dude would jump Rui and then get killed in a style as abrupt as his entrance.

Basically what I said last episode, since it’s still pending.

[Muffled screaming of hype getting louder in the background]

Demons getting defeated and a pep talk about what a real family should look like? Jk, I know that Ep. 19 is supposed to be hype. Some revelation of sorts, re: Tanjiro’s parentage?

Inosuke admitting he was gonna die and then seeing what appears to be his mother (?) in a flashback. I thought he had too much pride to even admit he was on the verge of death, but maybe that’s my conception of “manly pride”.

I’ll agree with Aria here. That was a lovely addition to Inosuke’s character, showing us him truly experiencing fear, and some backstory as well!

Spider father squishing Inosuke’s head. The sound effects did it.

Rui was kinda badass in that horror way – i.e. the way that sends chills down your spine. Excellent execution can do that to a viewer.

Man, this is a tough one. Shinobu and Giyu are so chill and awesome, but Inosuke was also great in this episode. Let’s not forget Tanjiro taking on two demons at a time, and Rui being a creepy mofo…

Shinobu~ Her attempt at conversing with Giyu in the beginning was wholesome.

Giyu showed up out of thin air in the Taisho Secret…literally! If you watch it again, you can notice motion lines coming from the top of the screen before he can be seen.

Please don’t think I’m weird, but… the water during Inosuke’s fight with spiderdaddy. Looked and moved so realistically, and was used to a beautiful effect during the battle, showcasing the force of the blows and the ferocity of the fight.

Have to go with the expected: Giyu slicing up Spider Daddy. It was fun seeing the Water Breathing Forms utilized by someone with an utterly different personality.

I’m going to pull an Astral and say I don’t think I have any quibbles with this episode.

I have no complaints either. A very solid episode, but also one that great things shall be built upon.

Spider Dad literally didn’t move half the time Inosuke or someone else was hacking away at his body. He can be confident about his sturdiness, but that doesn’t justify freezing on the spot (especially considering how angry he was).

I totally thought Tanjiro would correct Inosuke when he got called “Kentaro” as he flew a very long distance after getting deflected by Spider Daddy. If I were Tanjiro, my automatic instinct would probably be to correct Inosuke instead of yelling inspiring words as I fall to what might be my death. 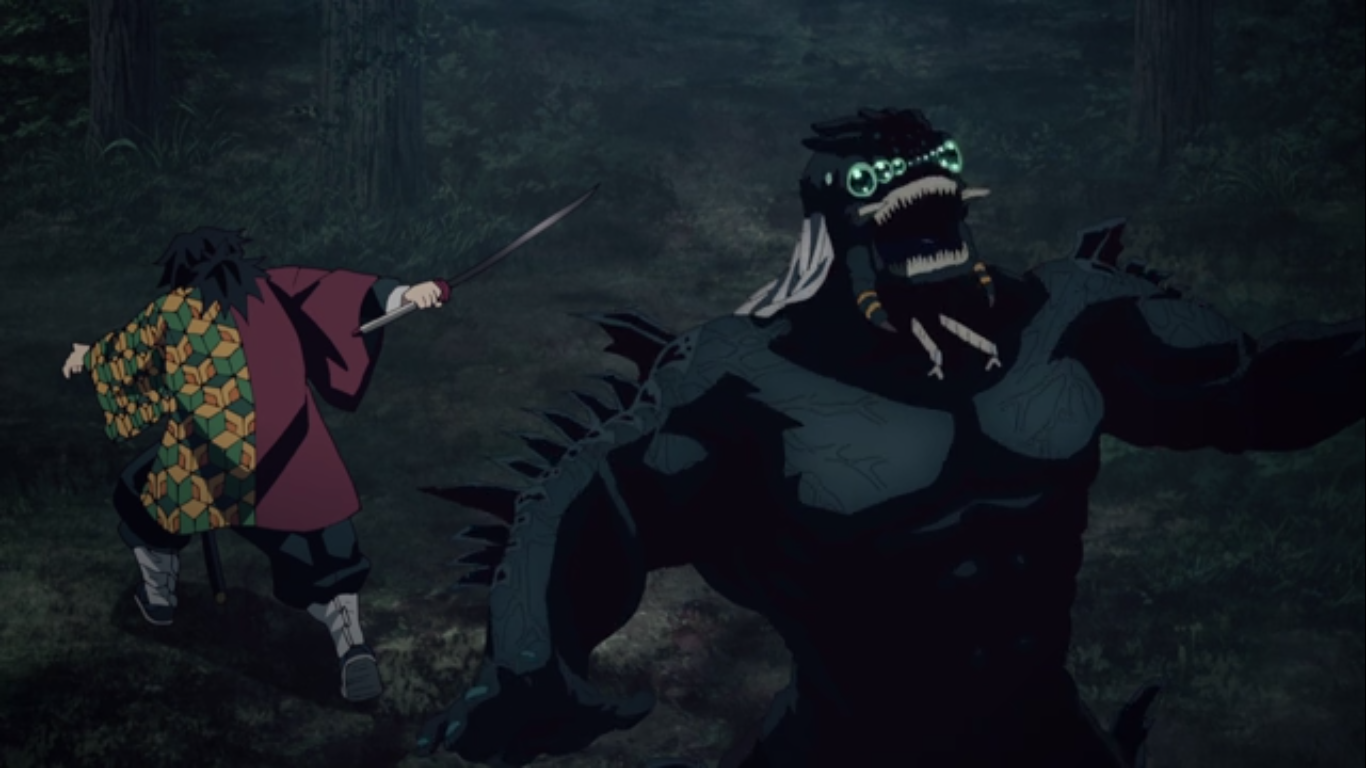 I’m going to take a cue from Astral’s cinematic angles to present you this piece of art: “‘Before the fall…of the spider dad’, 2019.” 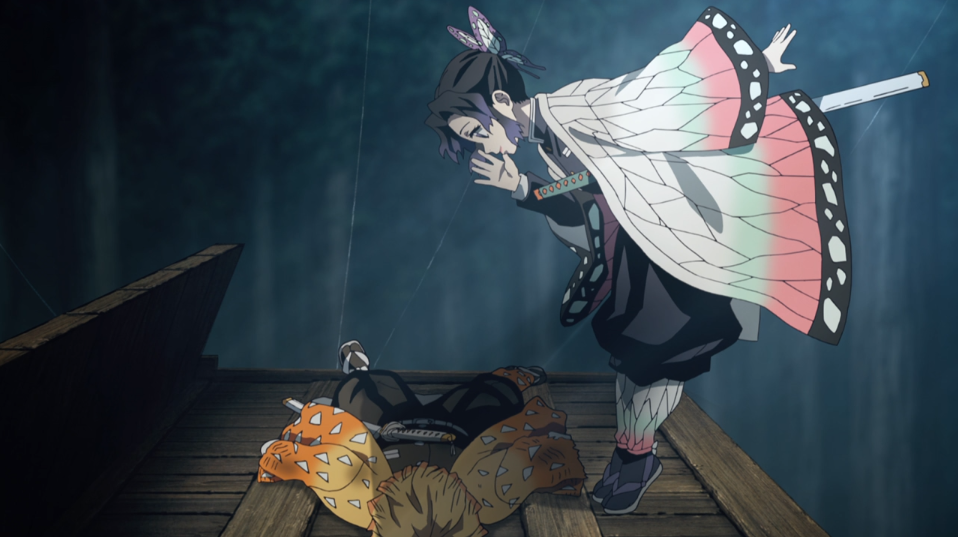 Now, this sequence was only a small bit of the episode, but I felt it really deserved some love. The shadows from the moonlight, and the mystical nature of Shinobu appearing to save Zenitsu, made this scene just lovely to watch. 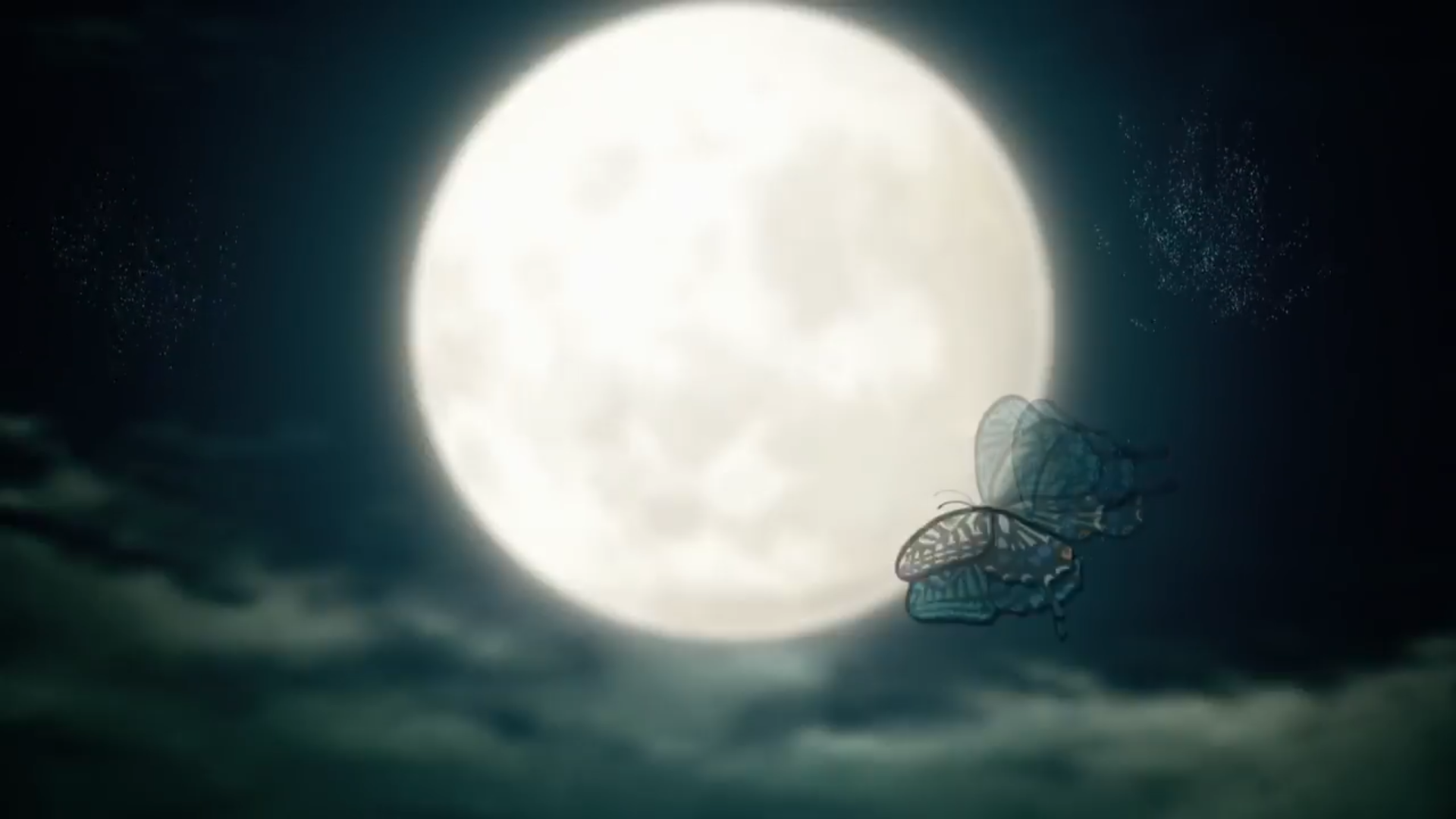 The music that accompanied this flitting butterfly sequence was beautiful.

In a tussle with

You know your life has gone wrong, when you have to call a spider “daddy”.

Did you know: 80% of shounen villains die more quickly after transforming.

Aria: It’s about Gotouge, which is why it’s not an Anibloggers’ Secret. (I have zero dirt on Moya, which is probably for the best anyway.)

Aria: Back in 2013, Gotouge got an award for this one-shot called Kagarigari. Guess who appears in it?

Aria: Okay, I’d better stop her before she starts kicking my head off…Here’s a hint for next time, from my copy of the first manga volume: