Ply’s caught a big ol’ cold and so we keep on keeping on without him.

Feel free to play this while you read, since I found it recently:

It was like we were suddenly thrust into a mystery series as the Hashiras and their master talked through what to do with Tanjiro and we mentally begged Nezuko not to give into her demonic urges.
Gosh, this was a painful episode to watch. And this is not really a criticism of the narrative either. First of all, the Hashira group consists of like 50% angsty Inosukes and 50% uncategorizable weirdos (shush, I know 9 can’t be divided evenly). You’d have thought they knew and behaved better, but whelp. Second of all, poor Nezuko…
What a fun episode. The Hashira are all a bunch of personalities, for sure, it was fun to finally see them all animated. It does make me angry seeing their treatment of Nezuko, though… She’s not a demon! She’s an imouto!!!

2. Did the episode fit your expectations, and in which ways did it differ from it? (If it does) [Mandatory]
Well, the Hashiras had odd personalities like I was implying with “Hashiras gotta be Hashiras”, but we don’t know about Nezuko yet.
Shinobu is actually mild compared to everyone else.
Apparently you have to be at least a tad off your rocker to be a professional demon slayer.
3. What do you expect to happen from here on out?(and why) [Mandatory]
We gotta find out about Nezuko, naturally. To take a huge stab in the dark, I’ll also wager there’s a cruel and unusual punishment for Giyu – namely, something to do with the fact he really can’t socialise…(although I don’t know what that “something” is, since we don’t know enough about Giyu’s weakness to do so…well, “we” doesn’t include Astral in this case, since he’s caught up).
Nezuko has to demonstrate her affinity to humans. Hopefully, this is done without capitulating to the impudent Wind Hashira guy who looks like Asta from Black Clover.
I’m just enjoying episodes without Zenitsu…
Discussion:

4. Which scene got the most reaction out of you? (If any at all)
The revelation one of the Hashiras has the surname “Shinazugawa”, which I seem to recall is the name of a certain angry Final Selection candidate…
Wind guy stabbing Nezuko.
How dare Shinazugawa hurt precious Nezuko!!!
Discussion:

5. Which character did you like the most this episode? Have they done anything in particular/changed?
Mist Hashira (it’ll take me a bit to properly learn all their names, but his name is Muichiro). His absent-mindedness reminds me of me.
Shinobu or Giyu, for siding with Tanjiro in their subtle ways. Otherwise, I quite like the Love Hashira’s positivity.
That poor errand boy who carries Tanjiro around. He doesn’t deserve the crap he gets put through… Or maybe Mitsuri. She’s such an adorable derp.
Discussion:

6. What’s the high point of the episode for you and why? [Mandatory]
“What is a Hashira?” Not only did it make me laugh for a bit, it also made me realise we know, but Tanjiro doesn’t know, what the heck a Hashira is.
In terms of where the climax is, the clear answer would be the episode’s ending. But I was really struck by the reading of the letter, the part where people pledge to commit seppuku if Nezuko eats a human (according to Urokodaki anyways). I half-expected a comedy moment where Giyu reacts in shock, but he remained silent, so I guess he knew?
What Moya said…
Discussion:

7. What can be improved in this episode and why? (a.k.a low point) [Mandatory]
I feel like the conversation – or rather, pauses between conversation, such as when the master appeared – was drawn out in order to have a good cliffhanger. (I wasn’t listening to the music though, so I wouldn’t know if there was music to accentuate those silences or not.)
The Hashira are way too irrational and immature for their ranks, but maybe that’s what makes them Demon Slayers??
It seems like whenever there’s not actual action going on, the pacing of this show slows waaaaay down.
8. Pick a situation from this episode. If you were put in this situation, how would you have handled it?
I didn’t feel like the Master had a lot of command over things, despite the apparent respect he garners, and I would change that if I were him. I wouldn’t say things like “I hope you would go along with that” – I would simply expect them to comply my decisions and make this expectation clear. And I definitely wouldn’t let Wind Boy wreak havoc. Unless the Master is secretly a curious sadist…which I suspect is the case?
If a dude was stabbing my little sister, I’d do a lot more than just headbutt the prick…
9. Most beautiful scene?(screenshot) [Mandatory] 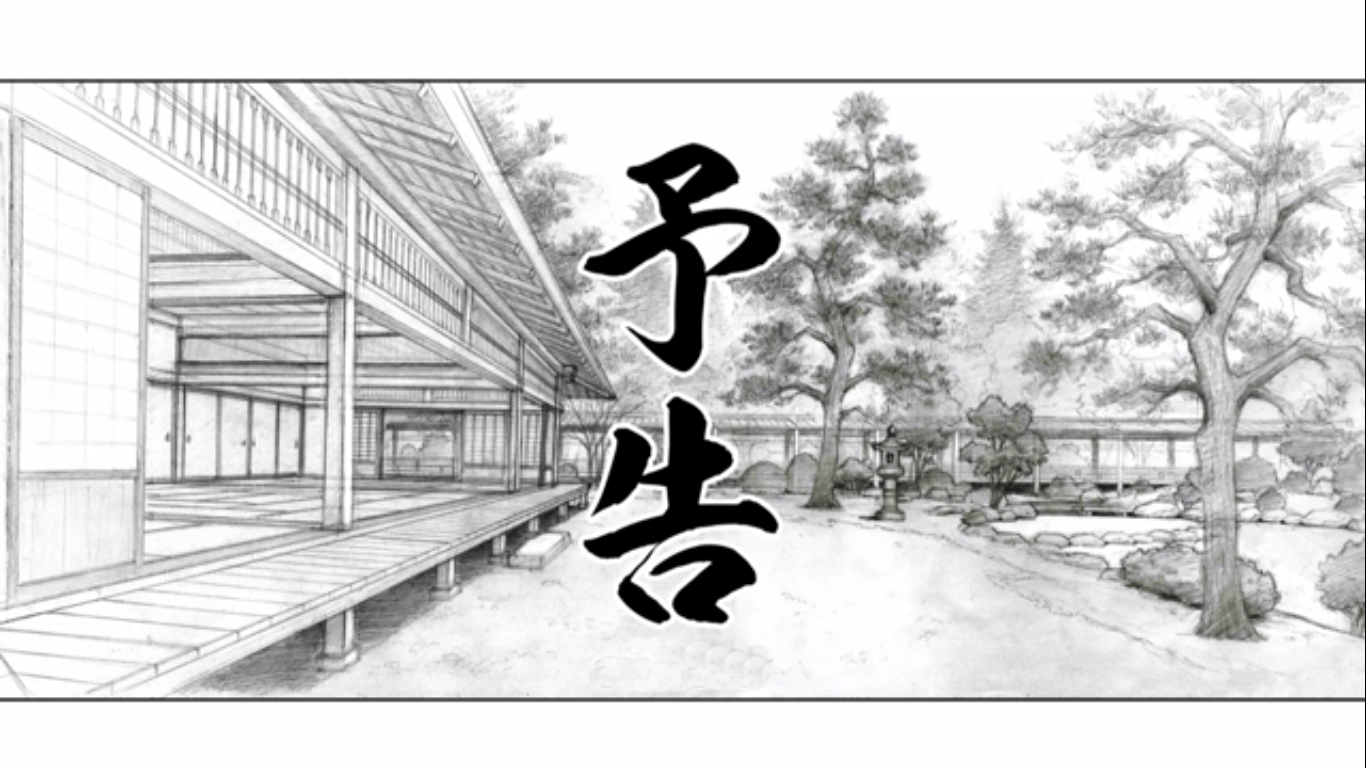 ( https://imgur.com/fuEiTVj )
I mean, this pic looks gorgeous, even with the kanji for “next episode” scrawled over the top. I had to clean the subs off it, but that’s a small price to pay for a good screencap. 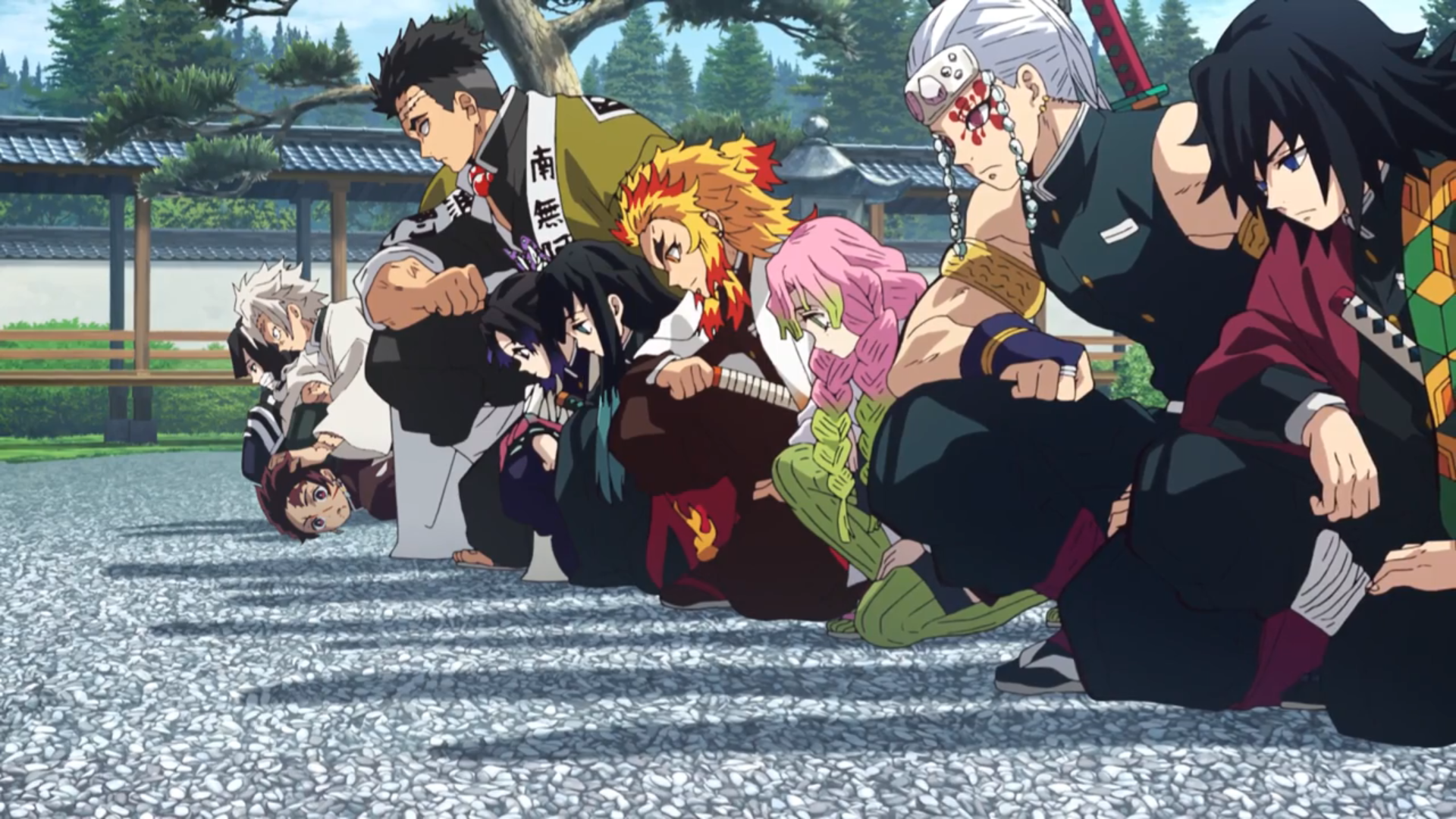 (https://imgur.com/a/cxPbxvr)
I can practically hear the silence here. 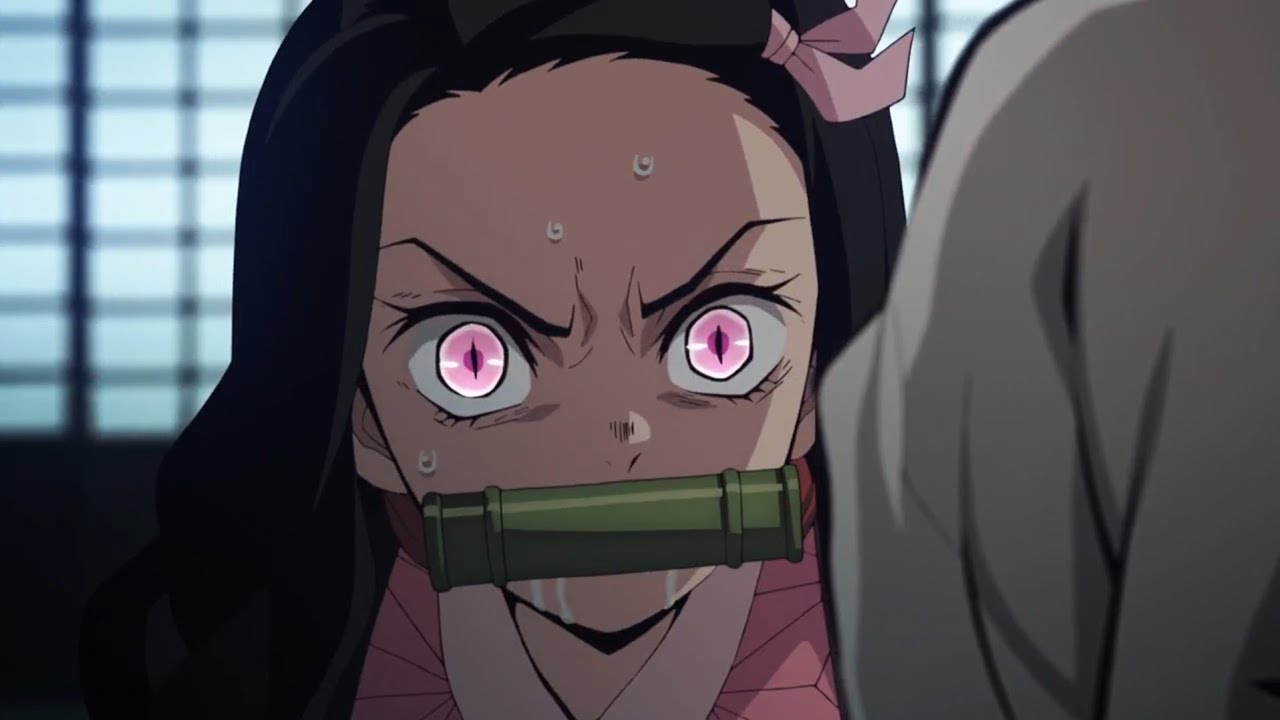 (https://imgur.com/R23avhn)
Angry Nezuko is equally adorable and scary.
10. In 10 words, summarise what you want to say about this episode. (A good joke question?) [Could also be a haiku or other things of that creative nature, Mandatory]
Hashiras squabble
Over master’s praise and chat
While Tanjiro squirms.
You know shit’s real when
Tanjiro uses his head.
Boy needs a helmet.
Hashira appear
Nezuko anger is near
Please, show, don’t end here
Discussion:

Another transition episode…
Pretty slow episode overall. Nothing particularly special to speak about, honestly.
Mostly similar thoughts.
2. Did the episode fit your expectations, and in which ways did it differ from it?(If it does) [Mandatory]
We found out about Nezuko, sure, but…why isn’t Giyu being punished? Because the demons are more active than ever…? Also, I didn’t need to know about Zenitsu’s KFC spork hands, as I mentioned for ep. 21.
Yeah pretty much.
Less happened than I expected, though I’m not strongly disappointed either. I thought there might be something climactic with Nezuko vs. Wind dude, for example.
Discussion:

3. What do you expect to happen from here on out?(and why) [Mandatory]
The next episode is called “Rehabilitation Training”, so…I expect just that. Maybe Zenitsu needs to train his tiny hands…I wonder how he’ll do that. If this is anything like Deadpool, then I sure hope it ain’t…er, pulling an Izumi (from O Maidens in Your Savage Season)…*raises eyebrows at what that means*.
TRAAAAAIIIINNNIIIINNNNGGG AAAARRRRRCCCCCC
“Rehab” and “training” just sound great together, don’t they? *Soft groan*
4. Which scene got the most reaction out of you? (If any at all)
The fact the Kakushi was like, “[Kanao’s] a girl, but she’s awesome!” *shakes fist aggressively at the Kakushi* Don’t you dare imply Kanao’s the only girl who can be awesome, you nitwit!
Tanjiro trying to go back for a head-butt. I thought the Master would actually let him do it, but turns out he’s not that cool.
Discussion:

5. Which character did you like the most this episode? Have they done anything in particular/changed?
I don’t think I have one, surprisingly. I’ve given up on Mist Hashira already (1) he’s 14 and 2) his flinging rocks at Tanjiro when the latter was injured was adding insult to injury), Tanjiro did one too many idiot moves (like trying to come back specifically to headbutt Sanemi) and there’s no Ukogi, so I’ve basically exhausted all my options right then and there.
Kanao, because she’s lovely and awesome. I can’t wait to see more of her as the series progresses.
6. What’s the high point of the episode for you and why? [Mandatory]
Quieter Inosuke. Sure, it would’ve been fine to see normal Inosuke and it sucks that he’s depressed, but the fact he’s not yelling at least distinguishes him from the wailing Zenitsu a lot better.
I gotta admit… I laughed hysterically at Inosuke’s new voice. That was hilarious.
The first few minutes when Nezuko was holding back while having family moment flashbacks. I don’t think there was much else to note for the rest of the episode.
7. What can be improved in this episode and why? (a.k.a low point) [Mandatory]
I’d complain about Zenitsu’s screaming, but I had the episode on mute when he appeared so…there was one anticlimax too many this episode, what with Tanjiro trying to get revenge every moment he can.
I forgot about Zenitsu’s screaming, and I don’t exactly appreciate the fact that it was brought back.
Yeah I’m there on Zenitsu…he’s kind of my sour spot on the whole series…

8. Pick a situation from this episode. If you were put in this situation, how would you have handled it?
Tanjiro… Buddy… did you REALLY need to go back just to continue picking a fight with the Hashira?
If my voice was so “fuwa fuwa,” I’d put it to use more often.
9. Most beautiful scene?(screenshot) [Mandatory] 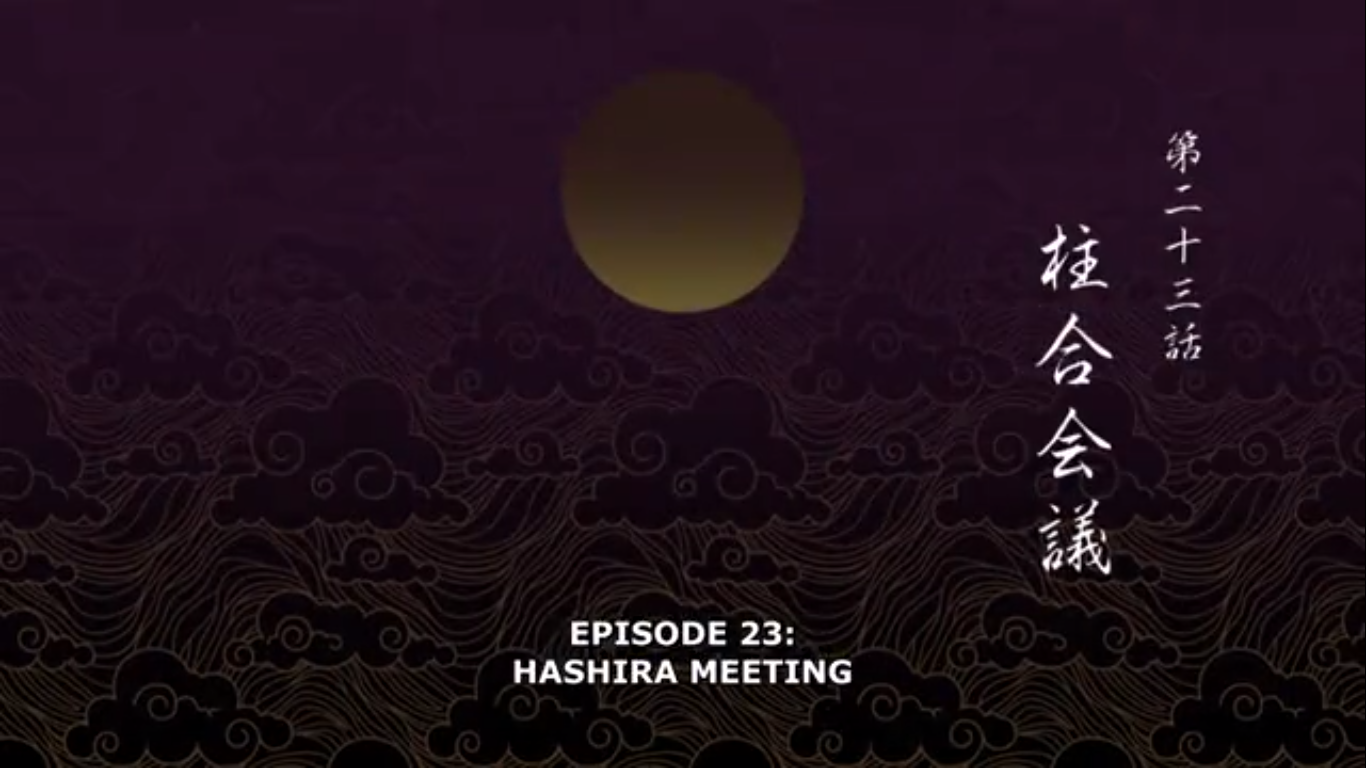 ( https://imgur.com/Ym74MWI )
I don’t think I’ve ever shown appreciation in the image section for the title cards, so here you go.
I also have some bonus Nezuko in a box .pngs for you ! 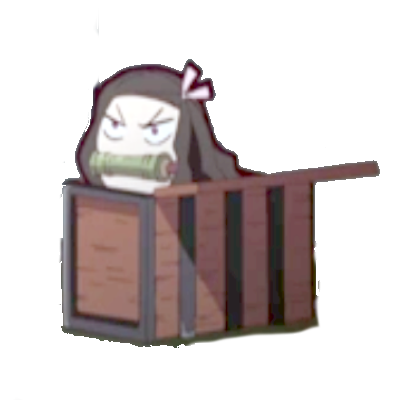 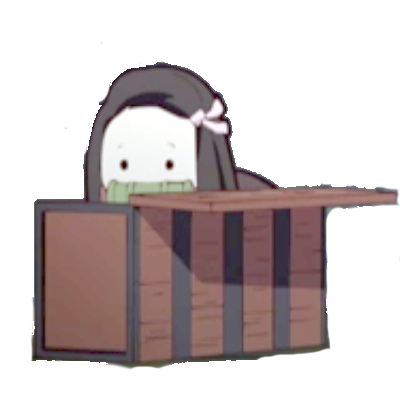 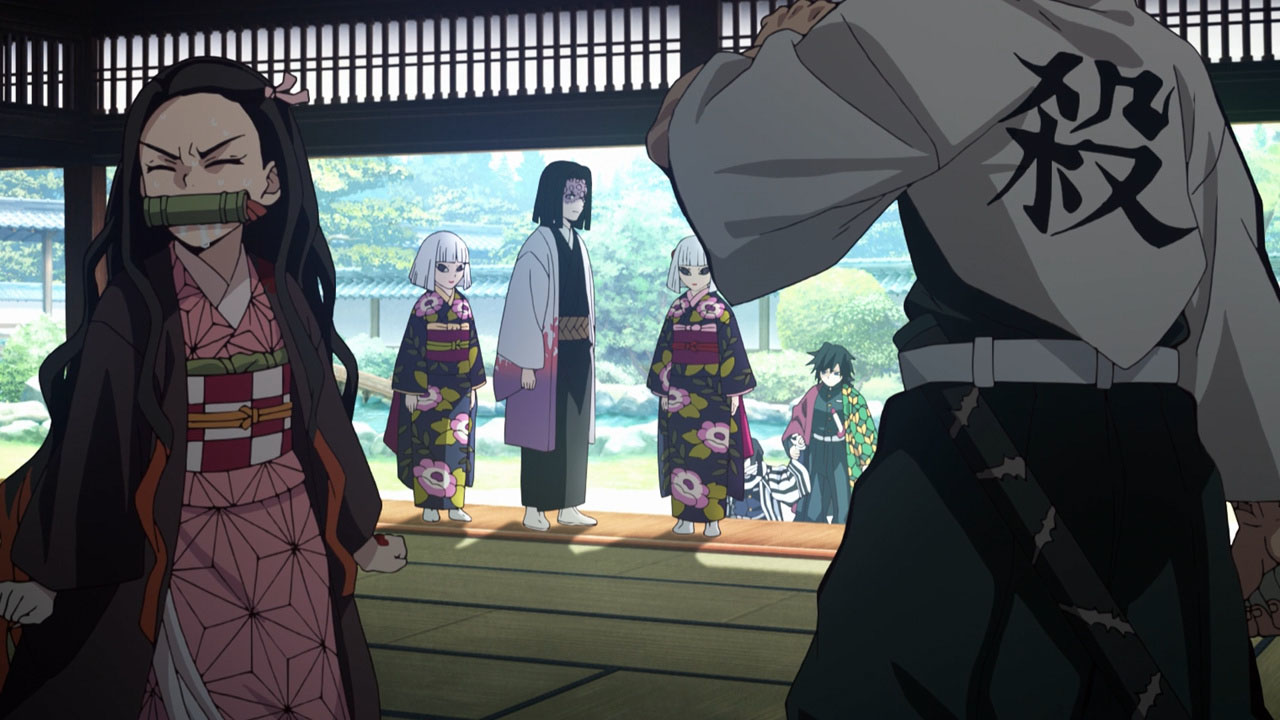 (https://imgur.com/2fYKl7c)
This is just a cute shot, a lot’s going on in both the foreground and the background here. Also looks like it could be captioned something like “N-no, I’m not gonna drink your blood, you b-baka!!!” 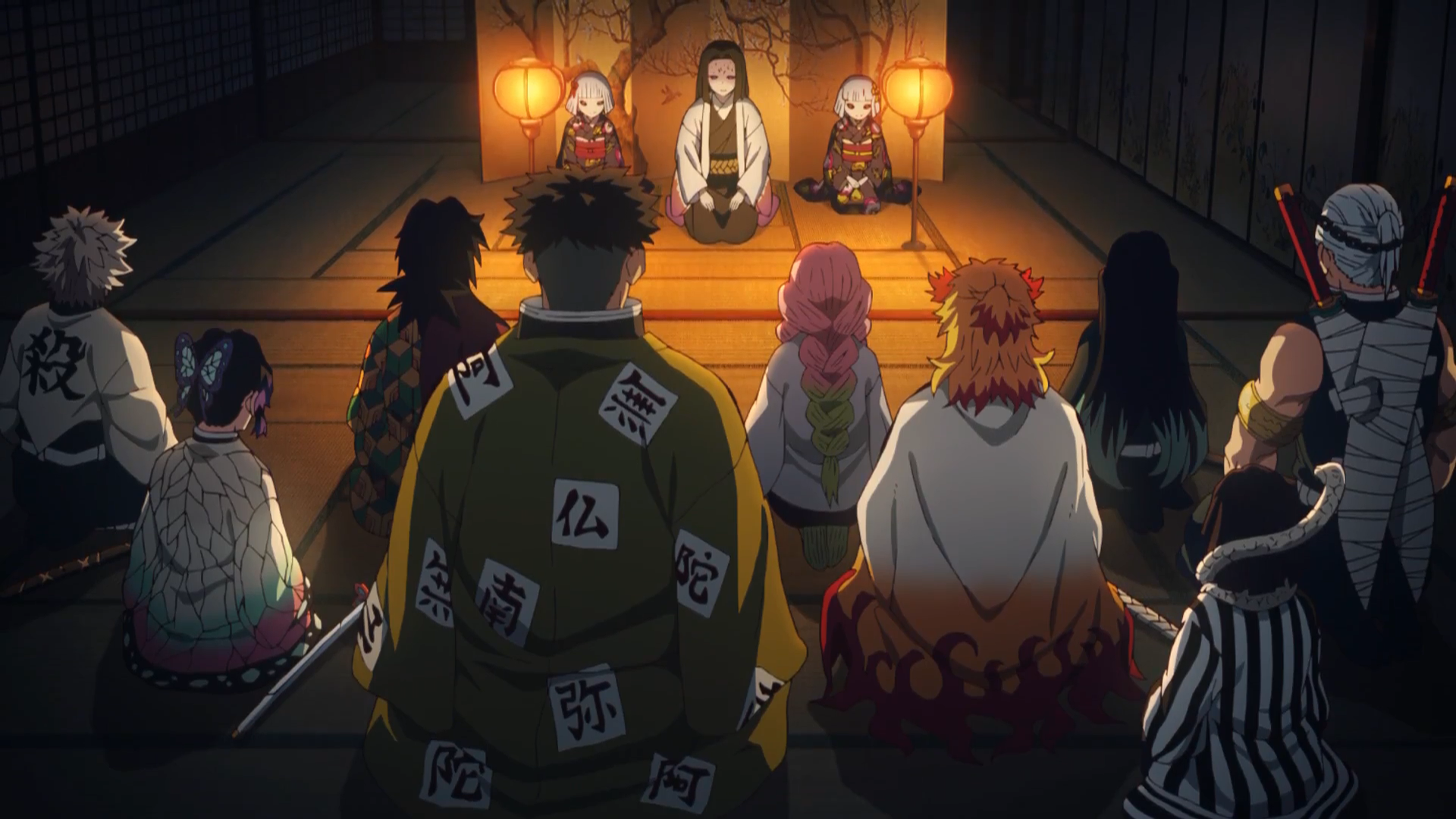 10. In 10 words, summarise what you want to say about this episode. (A good joke question?) [Could also be a haiku or other things of that creative nature, Mandatory]
Sanemi wakes up
Nezuko from her slumber…
But she won’t drink blood.
Blind man tries to control army of asylum escapees.
Meaningless meeting ensues while foolish boys are shoved into rehab.

Aria: It’s time for the Shonen Secret! (Yes, it’s different again, deal with it.)
Nezuko: Mmhmm!
Aria: Based on what Moya was saying about Asta, I checked up what his swords are called. It turns out Asta’s swords (he apparently has a few different ones, but they’re all black like Tanjiro’s) are all named something along the lines of “Demon ____ Sword” (specifically at the point in time that I’m writing this up, there’s Demon Slayer Sword, Demon Dweller Sword and Demon Destroyer Sword)!…So if Black Clover beats Kimetsu no Yaiba in the Weekly Shonen Jump rankings, can Asta be said to have actually slain some demons???
Nezuko: Hmm…
Aria: Now there’s a conundrum for the ages. Next time: the training arc continues…