Part 1 of the saga here.

After suddenly having to write most of the 12 Days of Aniblogging in advance, Aria was pretty tired of writing…but there was still work to do. Specifically, a skipped milestone last month meant that she had to look at the Spellbook’s stats for the new year.

The top day was Wednesday and the top time for posts was 9 am, corresponding with the time that posts came out weekly.

Here were Aria’s thoughts on the new top 10 of all time (not including previously discussed posts and because a lot of the top 5 was Demon Slayer collab posts): 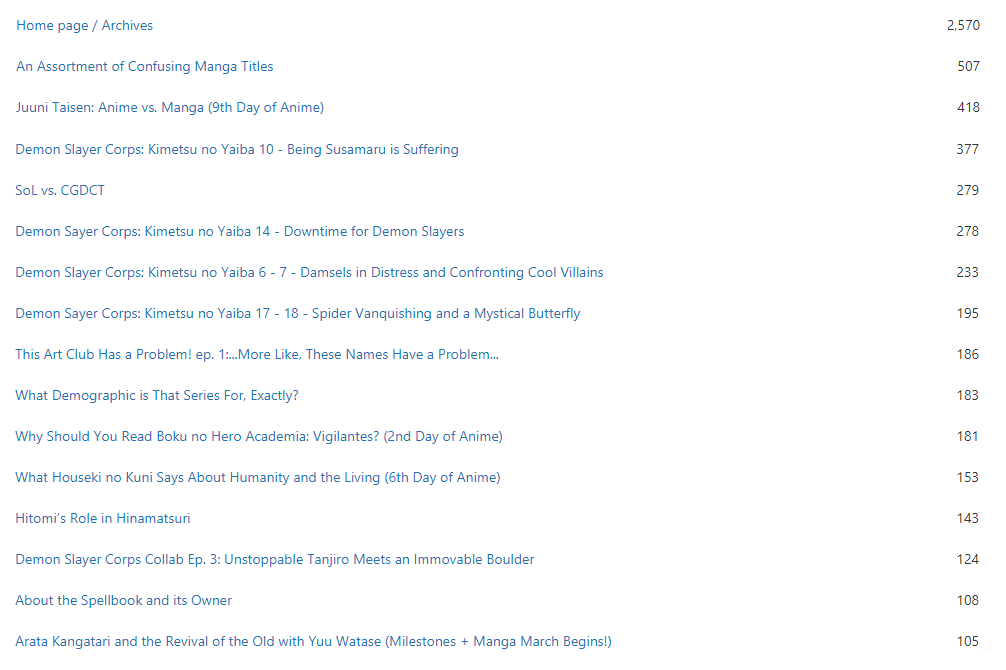 An Assortment of Confusing Manga Titles

“This was a pretty fun post to write and a really original one, although the spike in views is explained by the fact I checked the search terms and someone wants to know what Dorohedoro means. I don’t know what it means either, but maybe someone will have the answer in 2020 after the anime airs…?”

“Wow, this collab is really popular…The highest amont of outgoing clicks for the year belongs to Moya’s image of the Wisteria Mansion insignia from #14, which explains that and #10 is one of the first when you search the Demon Slayer collab from the blog’s search function.”

“You have to start somewhere when reading, and I guess sequential is best…?

The next few entries have all been submitted to Jon’s Creator Showcase, which might explain how high they are in the stats.”

What Demographic is That Series For, Exactly…?

“Still an interesting, thought-provoking post 2 years later, which asks about the future of manga magazines as the perspective on gender causes demographics to go extinct – which, I admit, is a topic basically no one else has ever thought to address in all my time reading about manga.

An interesting thing to take into account is that this post occurred before I got to set eyes on the works that changed my thinking about my own concept of gender, so maybe this could be seen as setting the groundwork for such a thing.”

What Houseki no Kuni Says About Humanity and the Living

“I still like this post 2 years later (despite the bad pun), particularly how I approached the topic – it’s bringing science to art, which is an approach which has picked up steam in the past few years (pun intended, if you don’t get it you can read about STEAM as a teaching approach here) – and considering it’s post #11 without ignoring any entries above it and #8 on the previous ranking (if you ignore the pages such as the home page), that’s a testament to the strength of this post’s longevity.”

Arata Kangatari and the Revival of the Old with Yuu Watase

“There seems to be a theme going on here…This year, I discovered Yuu Watase, despite being a shoujo mangaka, identifies as X-sexual (essentially “non-binary”), so that’s the third consecutive post in this list that refers – in some way or another – to the vagueness of gender boundaries within anime and manga.

I also find it interesting the next post down from this is the Iruma-kun post. Was Iruma-kun so unpopular with other bloggers that I basically had a monopoly on it, aside from Karandi’s coverage of it?”

There were 261 followers, which was 122 followers more than the last time a record like this had been made.

The most outgoing wanderers came from Imgur and there weren’t too many changes to how international the audience was.

There had been some very interesting things happening in the past year, such as a increased focus on the humanities (but a notable decrease in the yearly use of Japanese, which was counteracted with an actual trip to Japan). This meant more writing…although whether this had any perceptible influence on the content is anyone’s guess…

…and thus, another year was closed for the Spellbook.