Inspired by K’s Space is the Place posts.

It probably takes me about as long as it takes to write a post as it does to make one of these visuals, which is why I’m not consistently making them, because I get picky about transparency, artifacting and the like. That said, it’s still fun to make them, so consider this a look behind-the-scenes for how I work.

Instead of Photoshop , I use a free alternative called Paint.Net, which does most of the same stuff. If I specify patterns, they’re from the Paint.Net paintbrush/bucket tool.

I like having a font that matches the content in some way, whether that be the font name or the mental associations I’ve made. Also note I have no formal education in graphic design, so I can’t be too professional here – I just make what looks good to me, propped up by some self-education in typesetting and education in good website design. 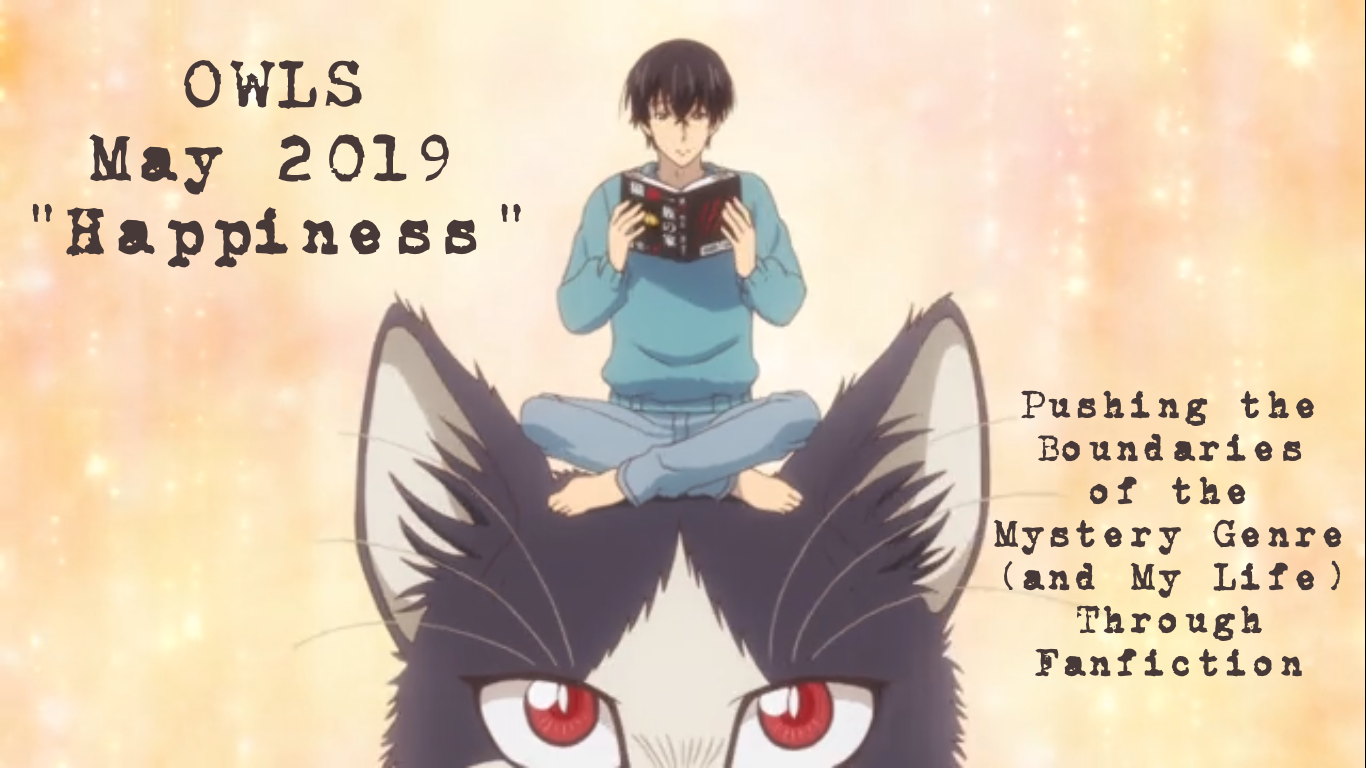 Like this image, a lot of the visuals for OWLS posts are a screenshot paired with the title of the post…nothing that exciting. However, when you get to some of the more elaborate visuals, the story gets more interesting… 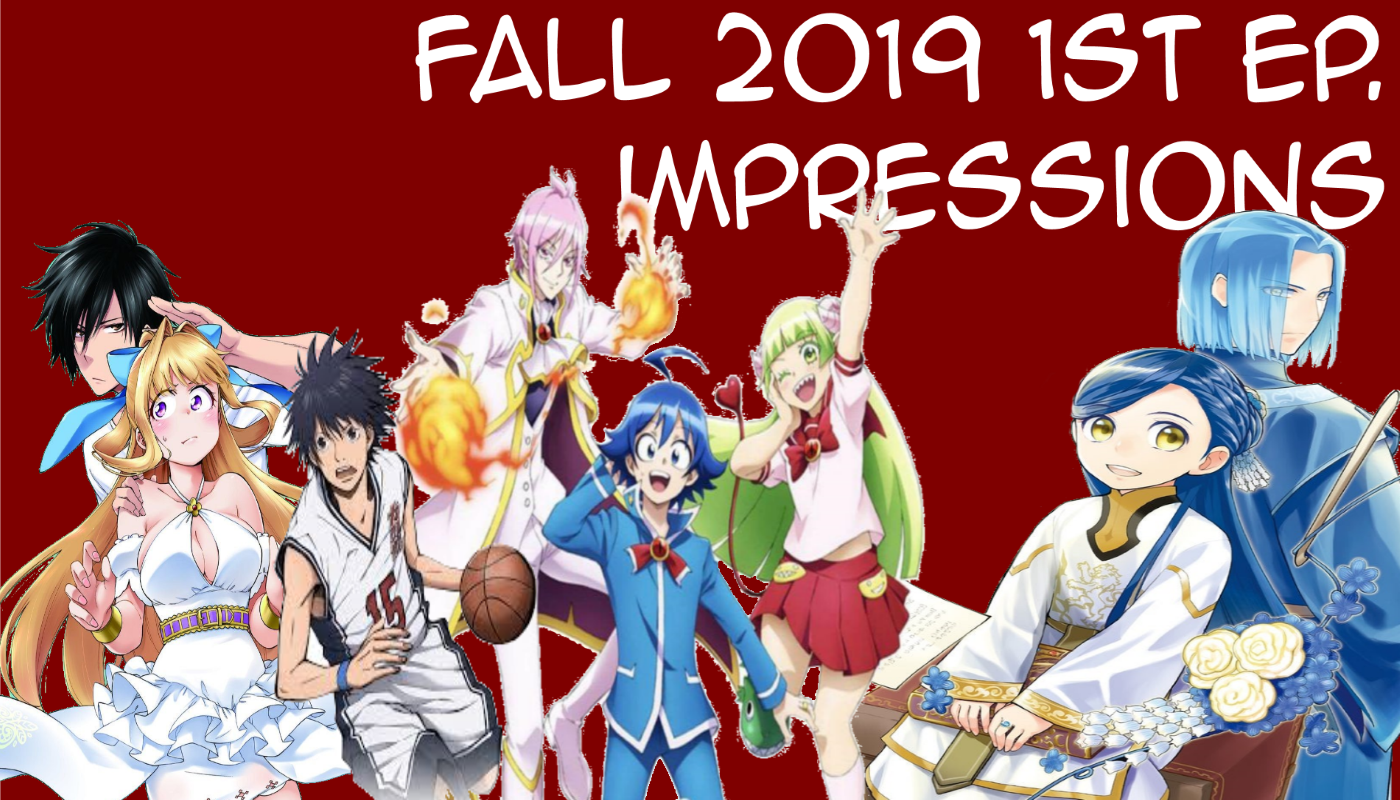 I’ll start with this one because it has techniques I rely on every so often – the characters overlap so that I don’t expose where they cut off, the plain background to bring focus to the characters and title…

The font is called Anime Ace 2.0 BB. Basically, I chased this font up because both scanlators and official translations seem to favour it so much. 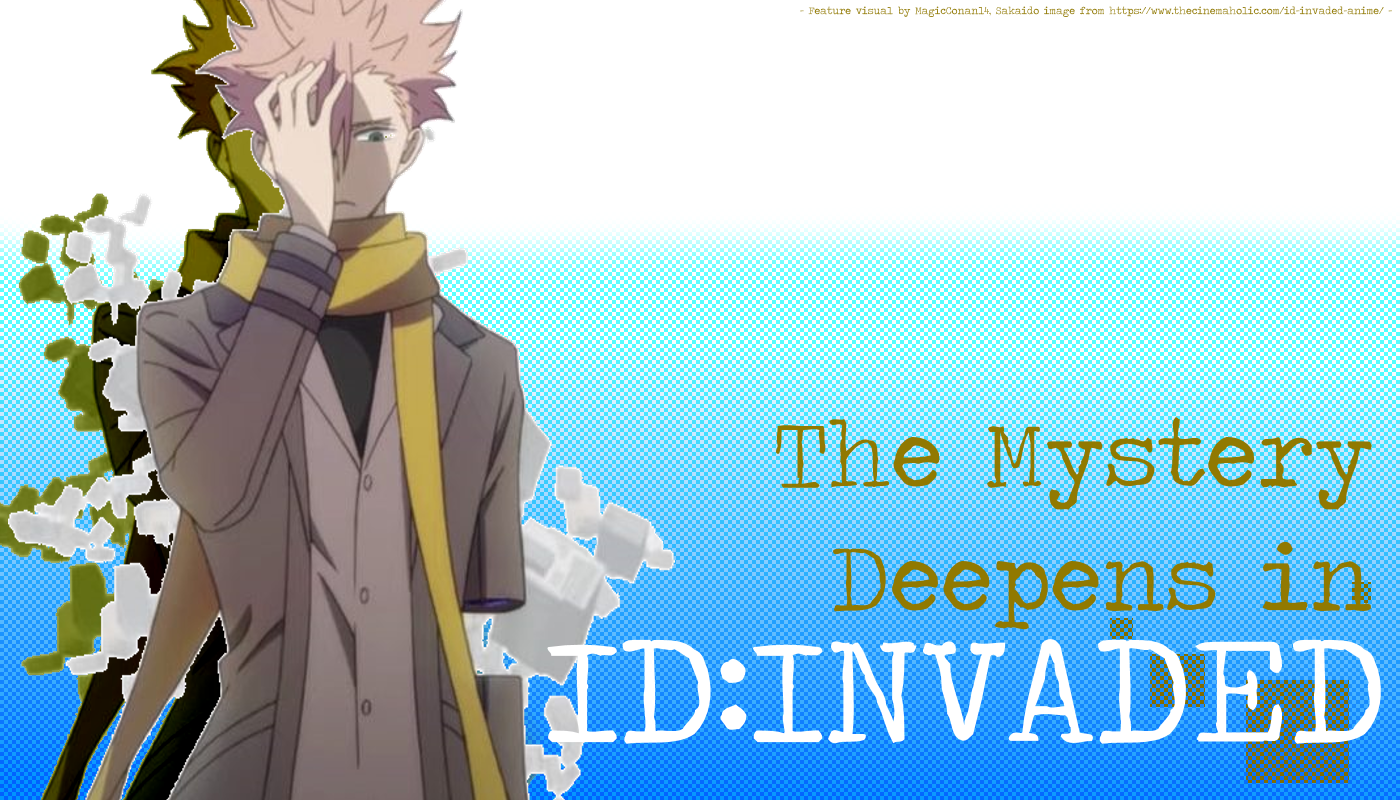 Originally, the concept was to have the falling Sakaido from one of the anime’s key visuals against the blue background, which emulates the pattern for the missing parts of him in Fukuda’s id well, so there’s a gradient layer with 2 different blues and a (small) checkerboard layer which were flattened together, with the top part removed by hand (although I could have removed it much more uniformly by just tweaking the opacity of one of the colours in the gradient). Eventually I found a different Sakaido image as a replacement, made a mustard brown duplicate layer of him and made some randomly-placed squares go behind the heading.

The font is called Travelling Typewriter and I think it summons the idea of a typewritten request or hostage letter, plus it’s both readable and got personality, so I tend to use it when working with mystery shows. If this font doesn’t work out, I also have CarbonType, which is used on the My Roommate is a Cat image above. 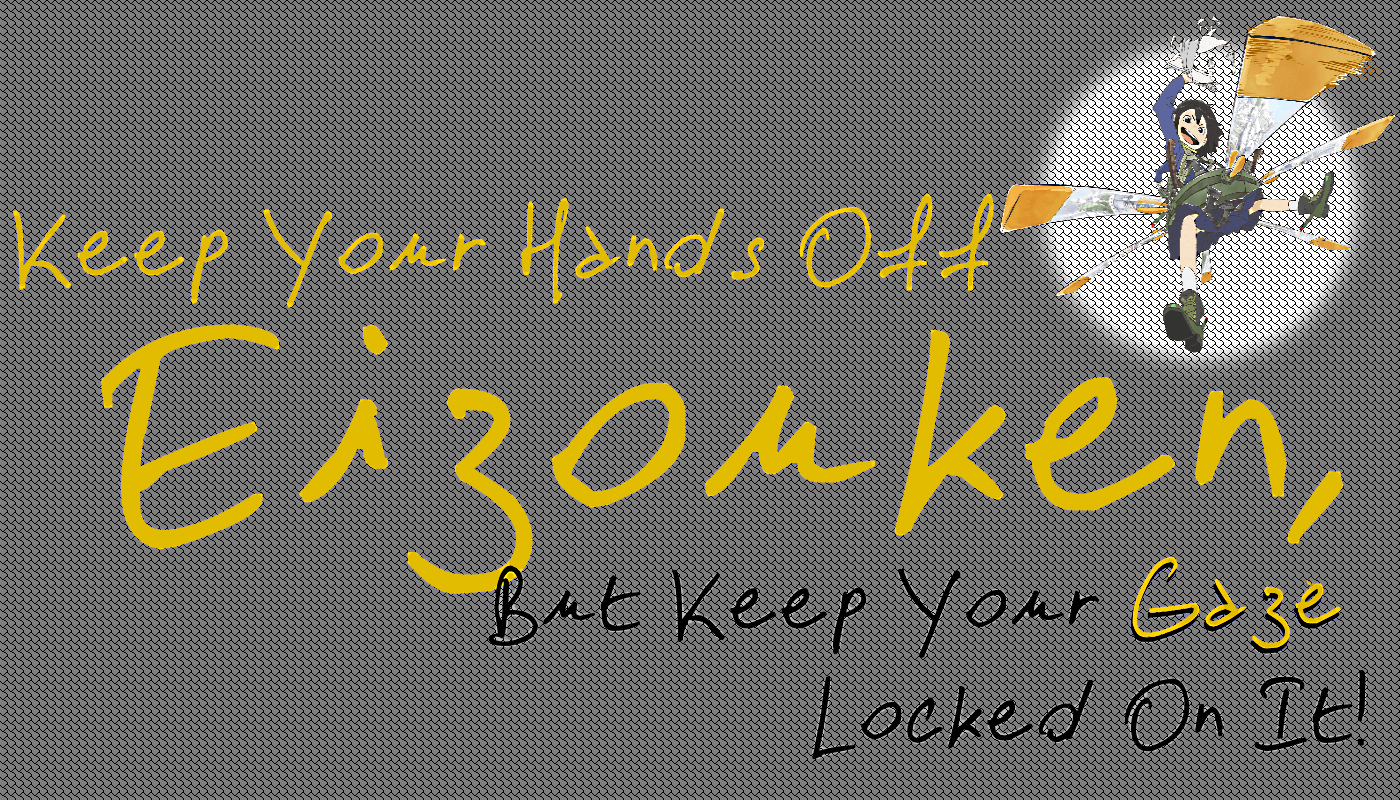 This post I made a visual for because I didn’t really know what to write for it and it’s safe to say that making visuals can get you out of writer’s block…temporarily. The mustard colour of the font, you might recognise, is roughly the colour Eizouken has on its logo. The background is a shingle pattern, which is grey with a single white spot on it to make a “spotlight” (since you can’t see Asakusa without it).

The font is SamDam and I think it brings to mind the chaotic energy Eizouken has (although it’s slightly unreadable to some, according to the feedback I got on it). One of the comments I got was that the comma was too low, so I had to manually erase and move it. 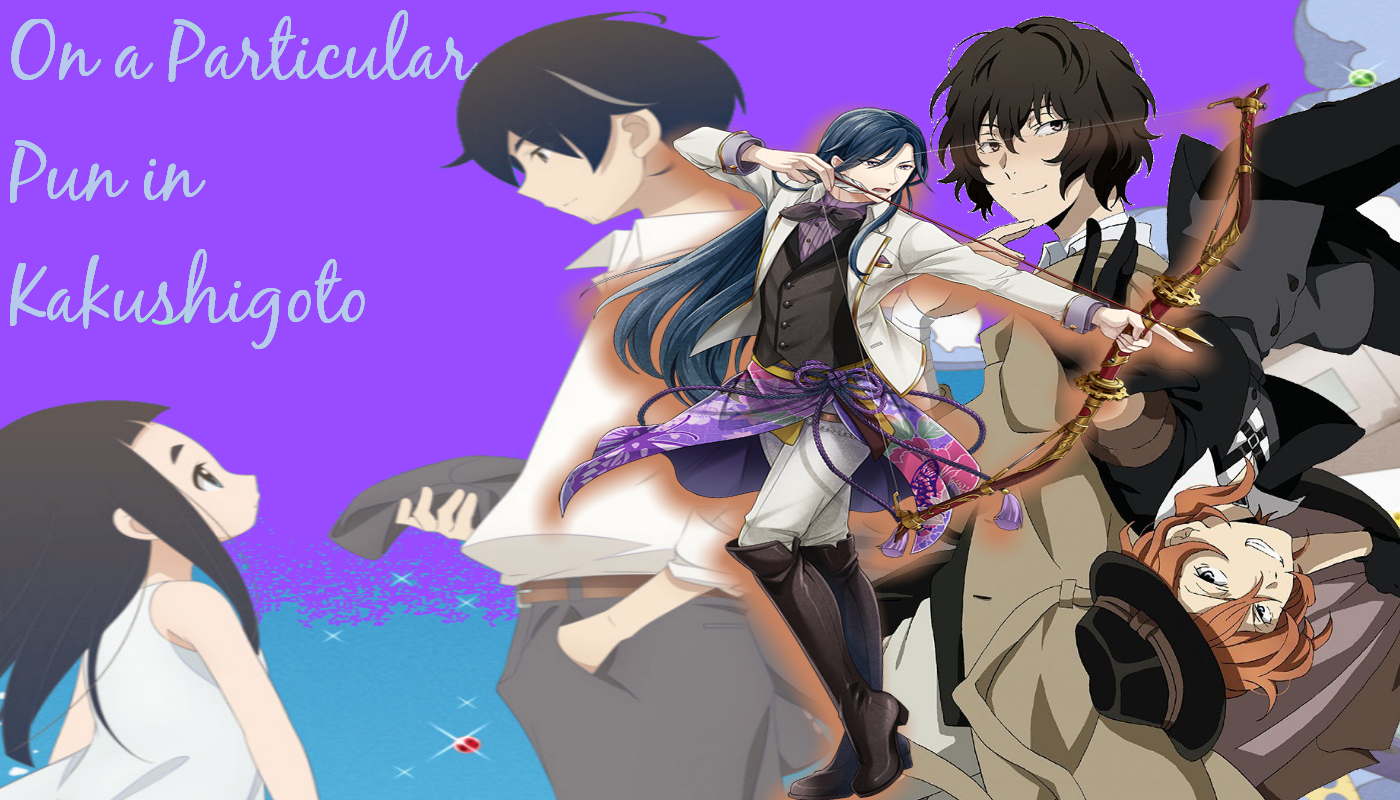 To be honest, Kafuu (the archer) is really just there to disguise the fact Dazai and Chuuya get cut off at one point – this is why I started my explanation with the fall 2019 visual. The layers go purple > font > Hime + Kakushi + blue + cloud (minus some of the sparkles so you can read the text) > Dazai + Chuuya > Kafuu.

Originally, the font was a mint green shade, upon advice from someone. However, I was rathr unhappy with it, so I consulted the feedback channel in Jon Spencer’s Discord server and so it was changed to the colour of the cloud in the top right. (Chris Voyager, he of the Galvanic team, also – correctly – noticed Dazai’s head had some artifacting on it, but I’d been wrestling with this one image for about 2 hours at that point, trying to get all the components to work together and that particular layer was a big chunk of that time.) Also, there was meant to be a bright pink drop shadow (to match the background and that pareo (?) Kafuu wears), weaker than Kafuu’s beige one, around Dazai and Chuuya, but when fixing the image up…I forgot about it.

The font is called Dancing Script. Simple, yet elegant, it fits the vibes of a classy mangaka or writer…which is exactly what the related post is about.

Sidebar: You can tell from me specifying my fonts’ names a lot, but if I like a font, I’ll try get it for myself, but my favourite font is actually a bit of a lazy choice, Lucida Calligraphy, and it’s been that way ever since I used that light blue WordArt with dark blue drop shadow to express myself (badly). Without that option, I also like Segoe Script.

These are only some of the recent images I’ve churned out. If you want to hear the story behind something else on this blog, just ask away in the comments.

8 thoughts on “Behind the Visuals”